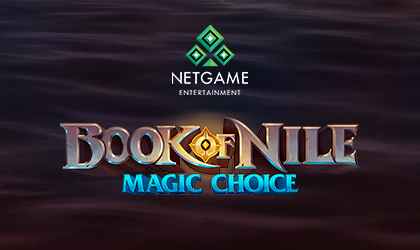 NetGame Entertainment, one of the leading iGaming casino software operators, has launched the third chapter of The Book of Nile slot series, called Magic Choice. The new title follows the second launch of the popular series Lost Chapter and invites punters to join the journey in mysterious world wonder, Egyptian pyramids, in on a great expedition past Ancient Egypt.

The game is played on 5 reels, 3 rows and is packed with an RTP of 96.10%. The Secret Book symbol is most important and valuable in the game and it acts as a scatter and wild. If 3 or more Secret Book symbols land on the reels, 10 bonus spins are triggered in the bonus game called Magic Free Spins. The key feature in the game is an opportunity for punters to make Magical choice, a bonus feature, that will determine their fortune. Before the bonus game, players select one of nine symbols, which becomes a special Expanding symbol. But that’s not all; if 3 or more scatters appear on the reels in the bonus game, players will have an additional 10 extra spins where they can pick another symbol. This feature gives players the ability to endlessly select new expandable symbols until they trigger 9 special Expanding symbols. The new title differs from the previous two releases because of the Buy Bonus mechanic.

NetGame Entertainment’s Head of Business Development, Andrey Vajdyuk, commented: “The Book of Nile series continues to be a blockbuster performer and Magic Choice is a marvelous addition. Players have the magic in their fingertips to make a choice that will deliver their destiny on the reels.”

NetGame Entertainment started operating in 2019 in the United Kingdom and then opened its headquarters in Malta and India. Its game titles are multilingual and are available in different currencies and the company is using customized software to ensure top quality and trustworthiness. A team of talented artists, designers and developers have produced astonishing slots, each is original and has a notable theme, personality, characteristics and bonus features. Game development begins with an analysis of themes and ideas, followed by the process of designing backgrounds and creating audio and symbols.