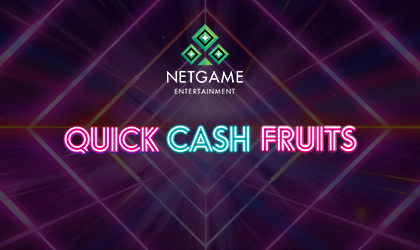 NetGame Entertainment, one of the leading iGaming casino software providers, has released the futuristic Quick Cash Fruits slot. The 5x3 grid game is fun and keeps players engaged for hours. Each symbol is scattered and brings payouts anywhere on the screen. The title is full of futuristic animations brought to life by a great soundtrack. The game has an RTP of 96.1% and this is a medium volatility game.

The new release offers a mix of several fun features that provides more cash reward options. The Quick Cash Spin feature is triggered during the standard game and has ten spin rounds. Each Quick Cash Fruits symbol found on the reels activates a neon border that remains on the reels until the end of the cycle. All neon frames stuck on the reels turn into four separate reels to give players the ability to multiply the bet. At the start of the Extra Spins Bonus, a random symbol is selected as a Sticky bonus symbol, which is fixed on the reels during the round. The split symbol will split the landing reel into four independent reels, where the maximum win is up to 50,000x the bet.

NetGame Entertainment’s Head of Business Development, Andrey Vajdyuk, said: “Quick Cash Fruits blends together a vast array of epic features to deliver a true futuristic player favourite. Our creative team has taken a classic theme and has added NetGame’s flair and we’re convinced this will be a sweet success.”

NetGame launched in 2019 in the UK and then opened offices in Malta and India. The games are multilingual and operate in different currencies. It also uses customized software to ensure quality and reliability. A team of talented artists and mathematicians have created incredible slots, each with its own unique personality and characteristics. Game development starts with analyzing themes and ideas, followed by the process of creating backgrounds, sounds and symbols. A clear indication of the RTP on each slot machine confirms that its games are fair.