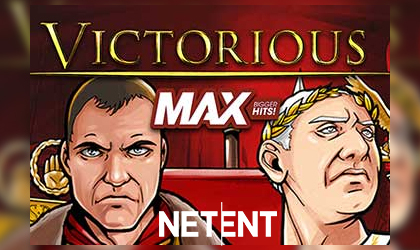 NetEnt has released a new slot game that takes players on a proper imperial adventure around Ancient Rome. With such an interesting theme, this title…

…brings a breath of fresh air in a market full of rather mediocre releases. Aside from its theme, this game also brings a number of attractive features.

Enjoy the Spoils of War:

The leading developer has paid a worthy tribute to Ancient Rome with Victorious Max. The game features a theme completely devoted to this period in history. Players are presented with the world of legions, marching armies, Roman emperors and more – all packaged into a stylish slot.

Aside from the background that depicts all of the aforementioned details and more, the game is also tied in by a great soundtrack.

Symbol design features a number of unique icons depicting anything from foot soldiers to legion commanders to the emperor himself. Despite being drawn in a cartoonish style, the title does command the appearance of a serious game.

Underneath all of the cool aesthetics hides a proper base game that brings several highly attractive features to the table. At its very core, this is a 5x3 grid slot that runs on 243 ways to win mechanic. This makes it fairly volatile.

Speaking of which, the game allows players to actually change volatility levels to suit their playing style. There is the classic setting that can potentially bring players x1500 their original bet. Then there is the Max setting that takes things to a whole new level with the max win of x7000 the original bet.

As far as special features go, the supplier was fairly conservative this time around. The game comes with a scatter system where 3 or more collected scatters trigger the bonus spin mode. Depending on how many of these symbols players draw, they can earn anywhere from 15 to 25 bonus spins.

NetEnt's, Bryan Upton, commented on the release of the new title and its features: "NetEnt has been at the forefront of innovation-first games development for 20 years, leading the way in creating optimized, player-driven content. Taking a 2012 classic like Victorious and now adding the game to our high-volatility MAX portfolio means that this Roman empire-styled slot is set to gain a new army of fans."

The new release is available at the developer’s affiliated online casinos. Additionally, the game was designed to run on both desktop and mobile platforms equally well.

NetEnt is one of the pioneering software providers with over 20 years of experience in the industry. This company is known for creating and publishing some of the most unique slot games on the market. With that said, the team behind the brand is pushing the limits of the industry by constantly developing new technologies.

It currently runs over 200 unique titles and has over 1000 employees around the world. It’s long history and stellar track record have made this company a prime partner of choice for numerous top tier operators on the market.