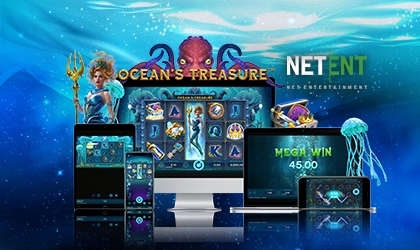 NetEnt, one of the largest slot game providers in the industry, has dropped a brand-new titled called Ocean’s Treasure.

The new slot is all about exploring…

…the deep blue and searching for riches on the ocean’s floor. Players can expect potentially rewarding features and run-ins with scary monsters!

The developer’s latest slot brings players a proper underwater adventure! The creative team behind this release knew what buttons to push in order to achieve an aesthetically pleasing yet rather unsettling theme.

As the game loads up, players are presented with a background that is frighteningly simple. It depicts the deep blue ocean and a Kraken that is lurking right behind the reels. There are no fancy details anywhere. Instead, the color gradient that goes from bright blue to ominous dark blue is all that is necessary to set the mood for this adventure.

With that said, background changes depending on what feature is activated. Symbol design follows the same idea. The lower paying symbols come in the form of card royals that match the theme in terms of aesthetics. The higher paying symbols feature all kinds of treasure iconography.

The is based on a standard 5x3 reel grid that is packed with interesting features. This slot offers an estimated RTP of 95.99%, making it attractive to both players who like more thrilling games as well as casual players.

The special features start off with stacked wilds that cover…

…the entire reel they drop on. Then, there’s the bonus spin mode that and progressive multipliers. Players can unlock up to 102 additional bonus spins and level up the multiplier up to x12.

Bryan Upton, NetEnt Director of Games, offered a comment on the new release: “Ocean’s Treasure’s combination of an immersive theme, striking graphics and anticipation building features are tailored to grab the attention of experienced slot fans and those in search of a high-intensity play session. Awarding more Free Spins to lucky players than any other NetEnt game and the potential for huge prizes, this deep-sea slot will make a lucrative addition to our partners’ portfolio.”

NetEnt is one of the largest software providers in the industry. The company has been around for over 20 years, delivering quality gaming solutions to customers all over the world. These days, it still produces slots and delivers a whole selection of tools that allow operators to exert complete control over the content they offer.

With a massive team of talented individuals pushing the brand forward, this company is constantly evolving and improving its services. It also recently acquired Red Tiger Gaming, thus greatly scaling up its ability to produce quality slot games.