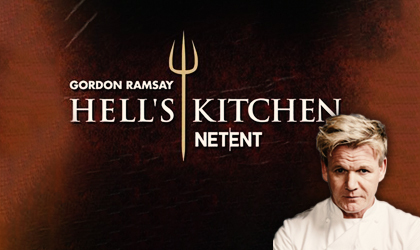 NetEnt, a premier software provider in the iGaming industry, has dropped news of a new game being released later this year. However, this is no ordinary slot title from the brand. On the contrary, this game…

…brings players for one of the wildest rides in town, headed by the none other than Gordon Ramsay. Titled Gordon Ramsay Hell’s Kitchen, the newly announced game promises to bring a thrilling experience.

Turning up the Heat in the Kitchen:

The developer is a company with a stellar track record of slot game releases. Its titles are immersive and often packed to the gills with great graphics. As such, this company has proven to be the perfect…

…partner for the celebrity chef’s signature slot game. With the deal already finalized between the developer and Ramsay’s people, this company is already putting things into motion. The chef is one of the…

…most energetic personalities on TV. Known for his short fuse and a rather creative choice of words, he is looking to bring that same type of experience to the reels.

The newly proposed game is said to have captured the essence of what Hell’s Kitchen is all about. Players can look forward to some of Ramsay’s trademark quotes as well as a mouthwatering scenery to give the whole experience that authentic feel.

Bryan Upton, NetEnt Director of Games, shared his insight regarding the new release: “Gordon Ramsay is a true rock star of the restaurant world. His strong personality and use of colorful vocabulary as front-man of Hell’s Kitchen have earned him legend status as a multi-Michelin starred celebrity chef, with fans all over the world. Just as importantly, this allows us to produce a true slot with a strong narrative and a lot of adult fun! We can’t wait to see what our players think of what we have in store for them.”

Jens Drinkwater, Licensing Manager at Global Merchandising Services, has also added: “NetEnt’s commitment to entertainment has made it a clear leader in the online casino industry and we’re thrilled to support the company with the addition of Gordon’s branded title.”

NetEnt is a software provider with over 20 years of experience. This company is one of the largest entities in the iGaming industry and has delivered a large number of high quality gaming solutions so far.

Specialized in immersive, cinematic slots, it is often considered to be a premier source of quality one-armed banding games.

As of right now, it runs a massive network of employees, with over 1000 professionals within its team. The company has handled over 44.7 billion gaming transactions in 2018 alone, which goes to show just what kind of infrastructure they are capable of maintaining.