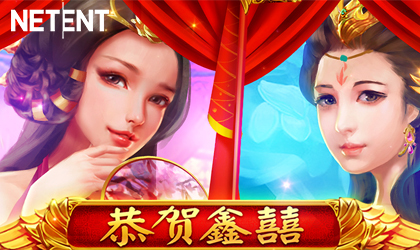 NetEnt, a software provider and slot game specialist, has just released a brand-new slot game inspired by the Far East. Titled Who’s The Bride, this slot…

…features one of the more interesting themes we’ve seen this year so far. Aside from that, players can look forward to a classic slot experience.

The developer’s latest creation takes inspiration from Chinese traditional weddings. The game is all about the celebration of marriage, but with a twist. We don’t know who the bride is! Players who decide to…

…crack this mystery will be treated with a very distinctive Chinese theme. The team behind the game has used all of the usual tricks and tools when it comes to making a Far East-inspired slot. The background, foreground and pretty much every other visual component features that red velvet we most often associate with traditional Chinese settings. With that said, the brand has done a great job creating a slot game that looks authentic and engaging at the same time.

Symbols come in the form of card royals for the lower-paying tier, while the higher paying tier features various objects. Most of these are associated in some way with traditional Chinese weddings or at least give off such an impression.

Smooth Yet Simple Base Game:

Enticing appearances aside, the title promises to deliver a classic slot experience that will most likely attract the more traditional slot fans. The base game runs on a 5x3 reel grid and 9 fixed paylines. Instead of…

…relying on various special features, the developer decided to keep things simple by offering sticky wilds as well as standard wilds and a bonus spin mode.

Sticky Wild symbols feature five different brides, all of which will remain on the reels during a Bonus Spin mode. It is also worth mentioning that players can unlock 5 additional bonus spins if they draw one or more sticky wilds on all of the reels.

Bryan Upton, NetEnt Director of Games, has shared his take on this release: “Who’s the Bride? is a simple, yet beautifully-crafted slot. It’s a perfect union of graphics, sound, and gameplay with high volatility and simple, proven mechanics.”

NetEnt is a slot game specialist and software provider that has been operating in the iGaming industry for over two decades. During that time, it has grown into an industry-leading authority with over 200 high-end slot games in their portfolio. Its team of over 1000 talented professionals from all over the world has been working hard on developing new technologies and finding ways to bring entertainment to a whole new level.

Its team’s dedication to this goal has made them a trusted source of slot games and other iGaming content. So far, their distribution network contains a number of top tier online casino operators who have a presence in various regulated markets all over the world.