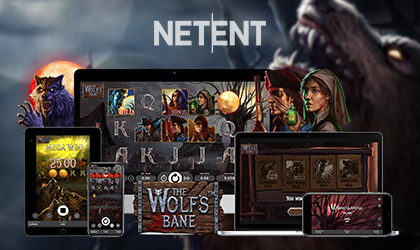 NetEnt has just announced that they have released a new slot game titled, Wolf’s Bane. The game has a very strong spooky vibe that…

…makes this release perfect for Halloween. Fans of the genre will absolutely appreciate the level of effort that went into this game to make it a proper thriller.

Full Moon and Terrible Beasts of the Night:

The latest slot from NetEnt brings the perfect mix of terror, thrill and potential reward to players who appreciate the spooky genre. The team behind this release has let their imagination run wild and come up with an incredible storyline that will keep the players at the edge of their seats.

This slot takes place in the 18th century, in a small, forgotten village that is ravaged by all of the usual problems of the time such as famine. However, this village also has to deal with beasts that come out at night, as well as a myriad of other equally creepy individuals.

This title, much like any other release from this software provider, features highly detailed graphics that increase immersion above what most reel games offer. Every in-game character is lifelike and comes across as very realistic. The developer has also gone above and beyond with background details, which not only set the mood for the game but add to the suspense.

This game was designed to run on 5x3 grid and 10 fixed paylines. With a well-known set of base game mechanics, it offers familiarity. Where the game really stands out are the features.

Players who get lucky will be able to enjoy bonus spins, interesting wilds, as well as a point-and-click mini-game. All of the features give this game enough character to make it a proper thriller with great player retention.

Bryan Upton, NetEnt Director of Games, offered a comment regarding the new release: “The Wolf’s Bane is a beautifully designed slot that will make your hair stand on end. Its launch has been timed to coincide with Halloween but it’s a game with a classic theme that we expect to have great longevity and wide appeal thanks to its proven game mechanics.”

More on the Software Provider:

NetEnt is one of the largest developers currently operating in the iGaming industry. The company has been around for over 20 years, tracing its roots back to a time when the industry was just establishing itself in the entertainment sector. Specializing in high-end slots, it has made a name for itself as a premier software studio. Since its humble beginnings, this company has…

…released over 200 games, employed more than 1000 professionals and handled over 44 billion gaming transactions through their platform.

Today, the team behind this brand is looked upon as a figure of authority among its peers. Despite its massive size, the brand is constantly on the lookout for new operators to add to their ever-growing distribution network.