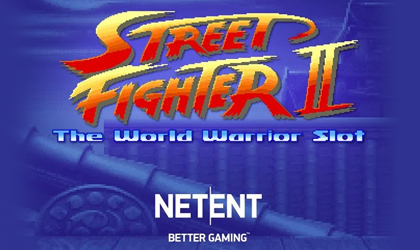 NetEnt has announced the release of Street Fighter II: The World Warrior – another high-profile branded title.

The latest slot is arguably one of the most legendary…

…games to be released. Today, decades since it was first seen in arcades around the world, this game draws recognition. The slot version by the developer offers a slice of that original Street Fighter vibe.

A Worthy Tribute to a Legend:

The supplier is one of the rare providers who is regularly publishing slots inspired by high profile brands.

The latest project was inspired by the…

…legendary arcade game with the same name. This slot version brings a familiar aesthetic in a different package. It will take every fan of the original one on a stroll down the memory lane. All of the graphics are the same down to the exact color shades.

As players activate different features, they will find themselves in different environments. As for symbol design, the team behind the release has kept things simple but memorable.

The 5x5 slot runs on the “Cluster Pays” base game mechanic. Although fairly thrilling on its own, the base game is just the beginning. There are several special features that can potentially spice things up. These include the Car Smash Bonus Game, the Bonus Spin mode, and more.

NetEnt Director of Games, Bryan Upton said: “In developing Street Fighter II: The World Warrior Slot™ we felt a huge responsibility to ensure our slot game lived up to the iconic 90s original – a videogame which has continued to entertain fans for almost 30 years. Authenticity was the critical factor to the design of this game, from the arcade-inspired art and sounds to the game mechanics, as well as the Beat the Bosses and Car Smashing bonus rounds. We designed the game to fuel players’ nostalgic competitiveness throughout the gameplay. We are immensely proud of the end product and we hope players all over the world appreciate it.”

NetEnt is one of the largest software providers in the iGaming industry. The company takes great pride in being a part of what has driven and still drives the industry forward for a number of decades. With a dedicated team of professionals, the brand is uniquely qualified to build high profile games such as Street Fighter II: The World Warrior.