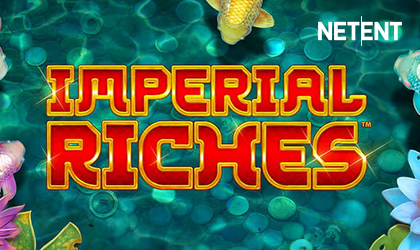 NetEnt, one of the premier content providers in the iGaming industry, has just released a new slot game. Titled Imperial Riches, the title takes players on an…

…interesting adventure set in the Far East. Aside from the visually riveting theme, the game also features a total of 5 different jackpots, 3 of them being progressive in nature.

Riches from The Far East:

NetEnt’s latest release is one of newest to feature the crowd-favorite Far East theme. However, the company behind the game made sure that their take on this popular theme brings something new and exciting to audiences.

Visually enticing, it features a scene that is set in an ancient Chinese garden. Players will find all of the trademark features these games are known for. There are the suspended walkways spanning across a pond full of lotus leaves, Chinese lanterns, and of course, traditional Chinese architecture. The developer went a step further and decided to animate the entire background, thus making the whole experience much more immersive.

The base game and special features it brings to the table greatly improves on the already intriguing title.

At its core, this is a 5x3 slot that utilizes the brand's trademarked Avalanche system, which causes the symbols to fall into their positions on the reels instead of being spun as in a regular slot.

Three PJPs and a Bonus Game:

On top of that, there is also the Lucky Pond bonus game where players can unlock the jackpot if Bonus Fish eat a specific number of jewels.

Bryan Upton, NetEnt Director of Games, commented on the new release:“This game is packed with features. We are continuing our Jackpot successes this year with Imperial Riches™ but with our Avalanche™ mechanic. The three-stage, nested bonuses give players a chance to experience the Free Falls game, collecting jewels from wins for entry into another coin win feature, and then a Jackpot bonus game. The chance to win one of five realistically-priced jackpots and the beautiful, authentic Asian artwork and theme makes this game speak the promise of fortune for players across the board.”

Look out for this title at affiliated online casinos.

NetEnt is one of the largest and most prolific software providers in the iGaming industry. This company has been around for more than two decades, delivering quality entertainment to players all over the world. With over 200 thrilling games in their offer, this studio is employing 1000 talented workers all around the world. Their statistics show a $41.2 billion in handled gaming transactions in 2017, which puts them in the company of top-tier high traffic software providers in the industry. It also operates one of the most efficient gaming platforms on the market.