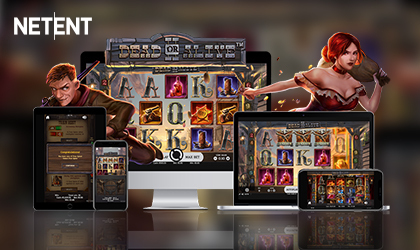 When something is good people are always asking for more and that’s precisely what happened when one of the most creative software developers, Net Entertainment, unveiled one of their most popular games in the world.

What Are We Talking About?

Devoted fans of this company will probably know what we are talking about. Those of you who have played the widely-known Dead or Alive reel slot will be thrilled to know that they have just released the sequel.

The first one received such a great response that they instantly knew a follow-up was A MUST! Fortunately, the wait is over, because the sequel has made its debut…

The Difference Between These Two:

NetEnt wanted to spice things up by incorporating extremely high volatility, a lot of additional spin versions and a plethora of enhancements and twists.

As we previously stated, this slot represents the reboot of their renowned, wild west-themed title. Notwithstanding that both of them are equally thrilling, this sequel comes with a lot of exciting moments just like the previous one, as well as a couple of extraordinary additions.

Furthermore, all these things were made in cooperation with some of the biggest casino streamers and members of the player community.

What is extremely tempting about this video slot is the fact that it offers extreme volatility and comes with large win potential. It is possible to hit more than 100,000 times the bet and consumers will have the chance to determine the volatility of the casino spin games. What does this mean?

It means that they will have the possibility to either win as frequently as possible or to grab some really sensational prizes! Moreover, this game consists of five reels, three rows, a wild character that serves as a substitute for every other icon, three slot spins games and scatter wins.

Those who remember the prequel can expect the same amount of thrill, especially if we take into consideration the fact that the second part also comes with widely-popular wild line.

“Given Dead or Alive’s immense and enduring popularity, it is a real responsibility to deliver a sequel to a game held in such high esteem. We’ve listened to the players and the slot community in this project to help ensure that Dead or Alive 2 is the best game it can possibly be.

We are incredibly pleased with – and proud of – the outcome of Dead or Alive 2 and are sure it will be a hit with those who love the original as well as a whole new generation of fans. It’s definitely a game for fans of high volatility.”

Learning More About The Game:

During the Old Saloon feature, every single win is multiplied by two and if at least one sticky wild icon is seen across the reels, it will trigger five additional spins. In High Noon, the MAX version of the three casino spin games, wild characters turn into multiplier wilds.

Finally, during the Train Heist casino spins, whenever a wild icon appears on the reels, the multiplier increases by one and one extra slot spin is given. In case the multiplier reaches x16, then players will be bestowed with five more spins!