Microgaming Unveils Slot for Only the Biggest SciFi Fans 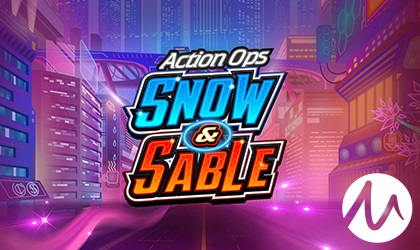 One of the biggest names in the gaming industry, Microgaming  have once again proven their talent and creativity by launching a video game called Action Ops: Snow & Sable. It is a sci-fi themed game that was released with the help of Triple Edge Studios who developed it.

The story is placed in the futuristic city that has an exotic name Aurora. The game is very dynamic and will easily drag you into this world where you can join the crime-fighting duo. If you’re a serious player and you are looking for some valuable prizes, then you must use the power of powerful cyber agents in order to expose Stacked wilds, mixed wild pays and casino spins.

How to Get the Most Out of It?

There are two characters in the story that act as wilds and they are the ones you will see having most of the action. Both of them can reward you with mixed and individual pays. Furthermore, Scatter icon enables you access to ten, fifteen or twenty bonus-spins. In order to grab them, you must land at least three of them respectively.

The Snow & Sable reel slot make reels one and five completely wild on each spin. The game will randomly assign a character to reel one and five on each spin with the player aiming to get the same sign on each reel for amplified winning potential.

Generally speaking, this game has a great potential when it comes winning superb awards, the only thing you need to do is to focus and the combinations will be made easily. Keep in mind, if you land two or three scatters during casino spins, you will be rewarded with five or ten additional spins!

“Action Ops: Snow & Sable is another creation by Triple Edge Studios – hot on the heels of their previous title, Wicked Tales: Dark Red. Featuring Mixed Wild Pays, Stacked Wilds and Free Spins, players can jump into futuristic, sci-fi slot action with the daring duo. This high volatility game offers wins up to 1,000 times the initial bet with a potentially rewarding base game, complemented by a free spin experience that has a high theoretical average return and the ability to retrigger. We look forward to unveiling more action-packed content from Triple Edge Studios in the coming weeks."