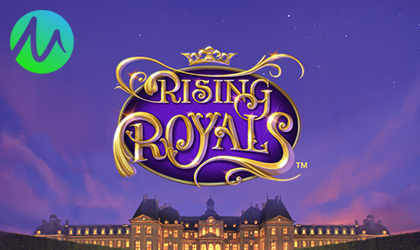 Microgaming has launched a new slot game titled, Rising Royals. The game brings a taste of high life with its lavish theme and potentially lucrative features.

The team behind this release went all out at creating a royal atmosphere that will make you feel like a true blue-blooded royal.

The High Life of Nobility:

The developer’s latest game developed by Just For The Win (JFTW), features a rather unique theme. Set in the gardens of Versailles Palace in France, this game…

…is all about the royal life. With its immersive graphics, players are able to sample a slice of noble life from back in the day when blue blood still ruled the world. Although the background is quite simple in a sense that there aren’t too many details involved, it is animated. JFTW has added glowing particles that improve the already flashy appearance of the slot.

Symbol design features the usual card royals as the lower paying deck, while the higher paying deck comes in the form of noblemen and women. Players will experience the characteristic clothing and hairstyles of the era which add to the immersion.

Tap into the Royal Coffers:

Although it looks quite immersive, the title offers much more than just the aesthetic goodness each of the contributing brands is known for. Namely, the game is…

…loaded with interesting special features. At its core, it offers a 5x3 reel grid that runs on 20 paylines. Players will have the chance to enjoy the Symbol Lock Re-spin feature that is triggered every time a winning combo includes all high-paying symbols. Said symbols will lock in place while the rest of the reels are spun again. Next, there is the Symbol Upgrade feature that allows players to upgrade the symbols, transforming the higher paying symbols into the next highest paying symbol.

James Buchanan, Director of Global Operations at Microgaming, said: “Just For The Win’s latest creation is an entertaining online slot that is equally rich in both graphics and features. The Symbol Lock Re-spin and Symbol Upgrade combine to add tremendous excitement with players looking for a full grid of the Rising Royals symbol, offering the potential for fantastic wins.”

Johan Persson, CEO at JFTW, added: “Rising Royals is an elegant and incredibly fun new title complete with powdered wigs, jewelled shoes and a whole cast of royal characters! Utilising the Symbol Lock Re-spin and Symbol Upgrade features, players have a chance to achieve magnificent fortunes. We are so excited for players to experience this feature rich game with endless glamour, class and nobility.”

As one of the largest software providers in the industry, the company established its presence over two decades ago with the invention of first online casino software. Since then, they have grown to become a leading authority in slot game design, production and distribution.