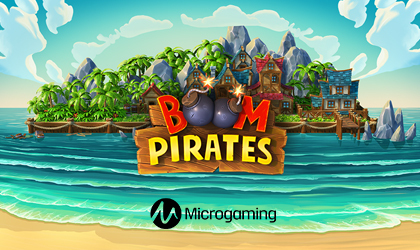 Microgaming has announced the release of its latest slot game titled, Boom Pirates. Fans of pirate-themed games are in for a treat as this slot brings the…

…thrill of high seas to the comfort of your home. Follow a fearless captain and her band of Pirates as they navigate their way to numerous treasures.

Developed by Foxium exclusively for Microgaming, the new release represents one of the more graphically engaging slots to come out under this company’s banner this year. With a theme…

…reminiscent of classic tales of pirates, hidden treasure islands and old, faded maps, it easily draws the player in. Those who are used to a higher standard of graphics will appreciate the fact that this game comes with several different backgrounds.

One depicts an isolated island from a bird’s eye perspective, while there is also a set depicting an idyllic lagoon at midnight with the main character’s ship safely anchored nearby. Symbol design features two tiers of symbols. The lower paying tier comes in the form of card royals while the higher paying tier depicts various pirate-related items such as powder kegs, cannons, parrots and more.

The base game runs on a 5x4 grid that is dynamic in nature. This title introduces Wonderways and Foxify features that will transform the 5x4 grid into a 9x4 grid, resulting in 10 million ways to win! These features make this slot a truly unique experience for both seasoned players and those who are looking for casual entertainment.

Åke André, CEO of Foxium, offered a comment regarding the new release: “Boom Pirates is set to be an explosive success and marks the maiden voyage of our new Foxify and Wonderways technologies, which we believe will transform the player experience and enable our creative teams to take game development to the next level.”

James Buchanan, Director of Global Operations at Microgaming, also shared his thoughts on the new release: “Boom Pirates is full to the brim with thrilling features, new mechanics and a soundtrack of sea shanties not to be missed. Captain Mary takes players on an exciting adventure as they navigate the game’s cannon fire, swashbuckling pirates and quests for treasure. The Boom Pirates feature expands the reels to an astounding nine-by-six grid with over ten million ways to win, offering players the potential for substantial rewards.”

Microgaming is one of the leading software providers operating in the iGaming industry. This company has been around since the ‘90s and has always found itself at the cutting-edge of technological solutions. Once a modest enterprise, the developer currently employs a massive team of professionals in several countries.

It also has a large portfolio of partners who produce exclusive content for this brand ensuring that fans of Microgaming always have something new and exciting to play.