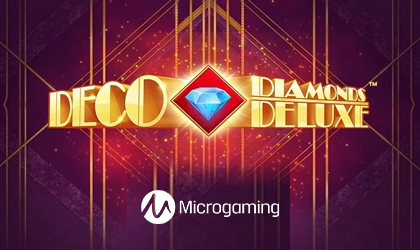 Microgaming and Just For The Win (JFTW) have joined forces once again to deliver an awesome game to their fans. This time they have put together a game titled Deco Diamonds Deluxe…

…which caters to fans of classic slot aesthetics and the overall Vintage casino style. With that said, the game still offers a number of interesting features.

Microgaming’s latest title developed for them exclusively by JFTW brings a rather simple aesthetic that perfectly conveys the feeling and aesthetics of vintage slots. The visuals have been limited to a small frame around the reels, thus focusing mostly on what goes on right at the center of the screen.

Speaking of which, this slot game offers a 5x3 grid that runs on 9 fixed paylines. With that said, this is still a high volatility game.

As far as special features go, the title offers several options. There is a bonus spin mode as well as the Bonus Wheel feature. Furthermore, there is the rather impactful Just For The Boost feature as well. Activating this feature means that the player’s bet will increase by 50% and automatically trigger the Deco Diamonds Deluxe Symbol Nudge. This feature alone makes the game very interesting.

Even without this feature, players are looking at a max potential win of 1000x the original bet.

James Buchanan, Director of Global Operations at Microgaming, commented on the new release: “Building on the popularity of the original Deco Diamonds game released in January last year, Just For The Win have successfully built a captivating sequel. The Just For The Boost with Deco Diamonds Deluxe Symbol Nudge is a perfect addition to this title, allowing for the opportunity to turn near-misses into fantastic wins and triggering a spin on the coveted Bonus Wheel.”

Johan Persson, CEO at JFTW, also offered a comment regarding the new slot: “Deco Diamonds Deluxe is a glamorous, art-deco inspired slot with all the charm and excitement of the Jazz Age. Glistening diamonds, fruits and a full cast of glittering symbols zoom across the reels in this fast-paced title complemented by a superb soundtrack. Deco Diamonds Deluxe pairs new mechanics with enhanced original features to create a truly spectacular game with the potential for significant rewards.”

The supplier is one of the oldest and most respected software in the iGaming market. What started out as an enthusiastic enterprise in the ‘90s has become one of the giants of the industry. It has done a lot for online gambling in general. In particular, it launched the first online casino software in 1994.

Ten years later, it went on to create the world’s first mobile casino software. Today this company runs a massive network of 3rd party software providers as well as a massive distribution network.