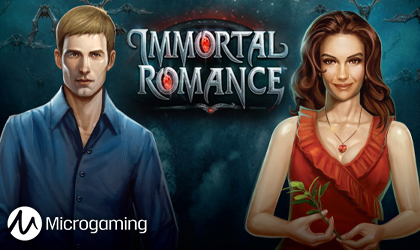 Microgaming, one of the leading software providers in the iGaming industry, has announced the updated release of its popular Immortal Romance.

This is an official revamp of their decade-old slot…

…of the same name that has been immensely popular all across Europe. The company has given this adventure a whole new look, making it an attractive piece of iGaming software.

The developer’s updated slot release takes us back to the world of vampires. This premier software provider has decided to treat its most loyal fans with a revamp of one of its most legendary games.

The new game offers the…

…very same vibe as the original, with the only difference being the new aesthetics and refreshed features. As the game loads, players will find themselves in a dark, glass-covered room of an ancient castle. It’s dark outside and the only source of light are occasional lightning strikes in the distance.

The broody theme is made complete by the awesome symbol design that brings the standard card royals in the lower-paying tier, while the higher paying tier is all about the main characters of this adventure.

As far as features go, this 5x3 slot brings a lot of the same. Fans of the original will love the Chamber of Spins and its four different bonus spin modes, the Wild Desire feature that can potentially net someone a 12,000x the original bet and more.

Overall, the game has managed to retain that volatile nature which has kept players at the edge of their seats since 2011 when the original first came out.

Andrew Clucas, Chief Operating Officer at Microgaming, shared his take on the release: “In today’s gaming landscape, it is imperative that we continue to strive to ensure that our entire casino offering remains at the top of its game – so while we will continue to provide quality game releases every month, we are also enhancing and optimizing our current offerings, such as our popular classics and feature-rich games, so as to bring players even more enjoyable and entertaining gaming experiences. Immortal Romance remains one of our most popular online slot games of all time. The remastered upgrades enhance and pay homage to our Immortal Romance brand, which continues to be enjoyed by players around the world.”

Microgaming is one of the oldest and largest software providers in the iGaming industry. Considered to be the veteran of the business, this company is responsible for key technological developments that have shaped iGaming. Today, they make awesome slot games and run a massive content aggregation program that works with numerous 3rd party studios.