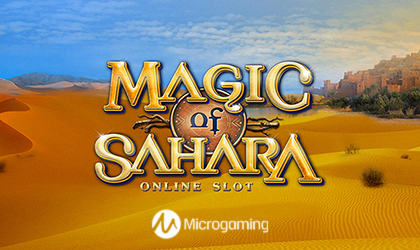 Microgaming has announced the release of Magic of Sahara, a slot game developed by All41 Studios. The game takes the player on an adventure deep into the North African deserts where sand is abundant and greenery is sparse.

Out there in the vast barren lands hides an oasis full of life and potentially valuable treasures. The story begins with the appearance of a mystical figure that announces the beginning of the adventure.

The Mystery of the Desert:

Magic of Sahara was developed by All41 Studios for the leading developer. This relatively young independent studio has been creating titles exclusively for Microgaming. Known for their attention to detail, the team behind this game has met and exceeded all expectations once again.

The theme of this slot is set in the deserts of North Africa and features a lot of interesting and highly detailed elements. These range from unique and mysterious characters to intriguing symbol design and more. Underneath the visual part hides a smooth base game that is packed with a few interesting features.

At its core, the game is based on a five-reel, three-row layout with a total of nine paylines. Among the special features offered, players will be able to enjoy extra spin modes as well as stacked wilds. The real star of the show is the Token Chain feature that allows the player to collect tokens and unlock extra spins. The total amount of spins that can be unlocked this way is 34.

The game takes things a step further with a fixed x2 multiplier in bonus spin mode and super stacked wilds. Representatives from both brands have offered their comments on the new release.

For Microgaming, James Buchanan, the Director of Global Operations, stated: “Magic of Sahara brings the wonder of the desert sands to life. All41 Studios have crafted a truly immersive world, with the game’s excellent soundtrack and detailed artwork, which dynamically transitions between day and night cycles, creating a spellbinding atmosphere. As well as providing a feast for the senses, Magic of Sahara delivers engrossing features in the form of the Token Chain collection mechanic and a highly rewarding free spins round, complete with the win boosting 2x multiplier.”

Julia Saburova, Head of All41 Studios, says: “We’re excited to take players on a mystical journey to experience the Magic of Sahara. Our latest slot adventure celebrates the enchanting fables of African nomad culture, combining detailed and dynamic graphics with engaging game mechanics. It has been a real thrill for us to capture the unique mystery and allure of the warm sands.”

Magic of Sahara is available exclusively through Microgaming’s affiliated online casinos and operators.