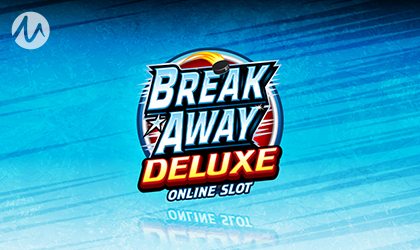 Microgaming, one of the giants of the iGaming industry, has released a new slot game that features a hockey-inspired theme.

Titled Break Away Deluxe, the new game brings potentially high bonuses and engaging base game features. It was developed by Stormcraft Studios exclusively for Microgaming.

The title brings the excitement of the favorite winter sport straight into your home with engaging features and potentially high bonuses. It sports a stunning yet simple theme that is packed with high-quality animations.

Being a mobile-friendly title means that the interface is limited to the reels, so there is nothing to distract the player from the action. Speaking of action, this new slot is brimming with it. Both developers tamed up for highly volatile, fast-paced gameplay that will undoubtedly attract the more experienced crowd as well as those who like the thrill.

The base game itself is anchored in the 5x5 grid that features adjustable paylines. The player can choose anywhere from 18, 38, 68 and 88 paylines. As far as special features go, the game offers Smashing Wilds that randomly transforms an entire reel into a sticky wild. Then there is the extra spin mode as well as a multiplier trail that goes up to 8x.

Feedback from the Developers:

James Buchanan, Director of Global Operations at Microgaming, gave the following statement: “Break Away Deluxe takes all the action of the phenomenally popular original slot, layering it up with even more exciting and rewarding features. Stormcraft Studios have successfully created a high volatility slot experience, with excellent win potential up to 3,200x the initial bet. We’re looking forward to seeing fans and new players alike immerse themselves in this engrossing update of a true Microgaming classic.”

Terence Igesund, Executive Producer at Stormcraft, also stated: “We are really looking forward to the wider launch of Break Away Deluxe, the next generation of the very successful slot brand. Designing a sequel to a popular game is always challenging as expectations from fans of the original game need to be considered. At Stormcraft, we believe that successful sequels are not reinventions but carefully considered extensions. So, we set out to enhance the user experience with more choices for the player as well as increased excitement by extending the volatility. The Rolling Reels™ and Multiplier trail are still there but can now be enjoyed in a new reel configuration with the addition of Growing Wilds™ during the Free Spins feature. Designed with portrait mobile play in mind, the new mechanics are highly entertaining and offers great win potential.”

The game is live and available exclusively at Microgaming-affiliated online casinos within their operator network.