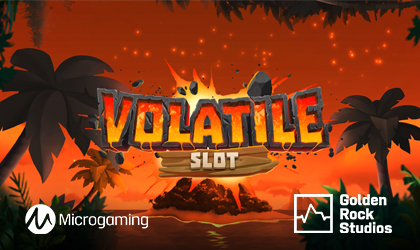 Microgaming, a slot game specialist and one of the oldest software developers in the industry, has released its highly anticipated Volatile Slot.

The game is currently being distributed across their network of affiliated operators, however there is no doubt that it will meet and exceed all expectations.

Explosive Reels and a Thrilling Ride:

Microgaming has created a lot of hype with the announcement of the game back in August. More precisely, the company behind this release has made the announcement. Back then, Golden Rock Studios had…

…set the release date in September. However, the circumstances were such that a few weeks of delay were inevitable. Even so, this studio from the United Kingdom has delivered on their promise!

Working exclusively for the developer, the studio behind this release has made the game available through Microgaming’s distribution network. As we’ve reported back in August, the game offers great graphics combined with cool animations. It is a highly immersive slot that draws players in and keeps them peeled to the screen. Those who prove to be lucky will experience ominous thunderstorms, exciting volcano eruptions and more!

Aside from cool graphics, this slot also packs a whole lot of awesome features. At its core, there’s lies a 5x3 reel layout that runs on 10 fixed paylines. As players spin the reels, there is a chance of Exploding Wilds that can…

…drop 2x, 3x or 4x multiplier. Additionally, there is the Volcanic Wilds as well, which trigger bonus spins and more.

Overall, the players stand a chance to potentially nail a 64x multiplier if they are lucky. Jean-Luc Ferriere, Chief Commercial Officer at Microgaming, commented on the release: “With more than 15 new games in the pipeline, Golden Rock Studios are set to broaden our range with fresh and diverse content. Volatile Slot is an impressive debut title and is now available across Microgaming’s entire customer base following a two-week period of exclusivity with LeoVegas.”

James Curwen, CEO at Golden Rock, also offered his insight regarding the new game: “We are proud to team up with Microgaming and look forward to providing them with many more exclusive games in the coming months. Our first release, Volatile Slot, delivers an exhilarating, high-volatility gameplay experience and is filled with stimulating game mechanics and vibrant visuals. This slot is by its very nature, volatile, and if the volcano erupts, the level of extremity is taken to a whole new level for the player, with the maximum win at a 25,600 times stake!”

The provider is one of the oldest in the industry. Tracing its roots back to the early ‘90s, this company has been at the forefront of technological advance. It was the first to develop an actual online casino software in 1994. A full decade later, they’ve come up with the first mobile casino system as well.