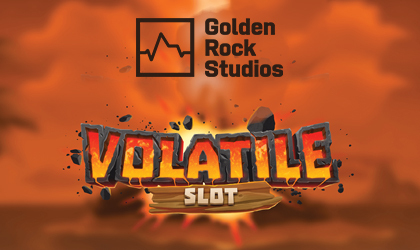 Golden Rock has dropped the news of a new slot game. Titled Volatile Slot, the latest creation from this studio is promising a more exciting approach to online reel games. With a release date set for…

…September of this year, the game is likely to become one of the more anticipated releases for the near future.

An Eruption of Possibilities:

Golden Rock’s new game is promising to be a treat for thrill-seekers with a taste for high risk, high reward types of slots.

Set on a tropical island, the scenery perfectly matches the theme of the game. With a massive volcano in the background that is ready to go, players are constantly reminded that the next big explosion is right around the corner just like the developer intended from the start.

The scenery alone is great, however since this slot was designed by a studio that is known to take the extra steps in terms of graphics quality, it features a truly impressive visual experience.

The other side of the equation is on point as well. They have used a familiar 5x3 layout with 10 paylines. Aside from the base game mechanic, it also features several different game modes including bonus spins. Wilds are the star of this particular game and bring various multipliers to those lucky enough to get them.

Appearing only on reels 2, 3 and 4, Wild symbols reveal multipliers of x2, x3 or x4. If a player draws more than one wild at the same time, they will stack.

On top of that, players can experience a volcanic eruption that will take them to a more aggressive and more volatile version of this slot game.

With that said, the maximum potential win in this game is staggering 25,600x the original stake. Such a sizable jackpot makes the game attractive to anyone who lives for the thrill.

A Word from the Developer:

James Curwen, CEO, and Founder at Golden Rock, offered the following comment: “We are always innovating and looking at customer trends, we believe gamblers are more mature now and expect more from their gaming session. Our aim is to deliver those experiences and we believe ‘Volatile Slot’ has our secret sauce.”

He further adds: “While many studios are just churning out re-skin maths with new graphics, we are totally dedicated to innovation, be that in our game concepts, our maths, our UX/UI to our features, we have spent endless hours ensuring everything is right before a game is launched. This is evident even into the way we have designed our games roadmap, which is in a unique Periodic Table format, to demonstrate that each game we release will be unique in its own right.”

Expect to see the title available in all of the brand’s affiliated online casinos, beginning this September.

Golden Rock was founded by two industry veterans in an effort to bring refreshing games and content to the market. With Will Mathieson and James Curwen at the helm…

…it has been delivering some of the most critically acclaimed titles out there. The company is working with partners in numerous regulated markets and is driven by a dedicated team of professionals.