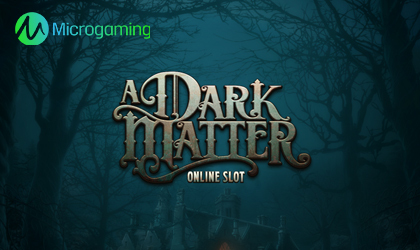 Microgaming, one of the oldest and most respected providers on the market, has released a new slot game just in time from Halloween. Titled A Dark Matter, the new game…

…brings that spooky theme that perfectly matches the holiday. Aside from that, this slot is all about smooth gameplay and interesting features.

Investigate the Mysteries of Stonehurst:

Developed exclusively for Microgaming by Slingshot Studios, the title takes players on a thrilling adventure. Stonehurst is a small English town that has had…

…a streak of disappearances keeping the locals on edge. Investigate this mystery and find out what is terrorizing this quaint little community. Your adventure starts in the spooky mansion just outside of town.

Much like other Slingshot releases, this features impressive graphics that offer the right level of immersion. All backgrounds, of which there are few, are highly detailed and very creative. Even though there are no flashy animations, the game draws the player in and keeps them entertained.

Symbols come in the form of card royals for the lower-paying deck, while the higher paying symbols depict a variety of characters. Some of them mysterious themselves, these characters might hold the key to figuring out what exactly is going on. This slot also features one of the best soundtracks of any game we’ve seen this year.

Not only does it add to the suspense, but the score becomes more and more ominous as you activate various features of the game.

The base game displays a standard 5x3 grid that runs on bidirectional paylines. The game comes with limited special features, which mainly come down to a bonus spin game and an Invading Wild mode where wilds cover the middle 3 reels are filled with wilds and a 2x multiplier is applied across the board.

James Buchanan, Director of Global Operations at Microgaming, commented on the new release: “Slingshot Studios have successfully created a high volatility slot experience with an engaging storyline, intricate artwork, and atmospheric sounds. The addition of Invading Wilds and bidirectional paylines offers an exciting and rewarding gameplay experience, with win potential of up to 2,400x the player’s bet during free spins.”

Richard Vermaak, Head of Studio at Slingshot, also offered a statement regarding the new game: “We are very excited about A Dark Matter’s release! The entire team has invested a lot in crafting a rich world for players to enjoy. They have created something beautiful, with arresting character portrayals and a musical score as lavish as Wraith Manor itself. Our aim was to create a truly theatrical experience coupled with high-volatility gameplay, establishing enough intrigue to whet players’ appetites without revealing too much early on. We can’t wait for players to explore A Dark Matter.”

Microgaming is one of the oldest software providers in the industry. The company has been credited with spearheading several…

…key technologies that have greatly helped the industry. One such notable example is the invention of the world’s first online casino software back in 1994. Since then, it has remained one of the main driving forces in the iGaming niche.