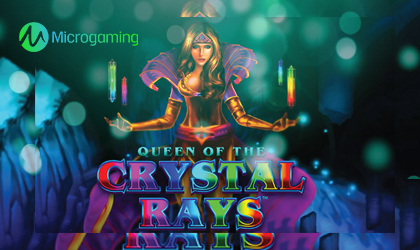 Microgaming, one of the most influential software providers on the market, has announced the release of a new slot game titled, Queen Of The Crystal Rays. Developed by…

…Crazy Tooth Studios exclusively for the leading brand, this new slot brings highly engaging gameplay wrapped in remarkable aesthetics. The game aims to satisfy both casual players as well as those who…

The latest Microgaming title features a dazzling theme. The studio who designed the game, Crazy Tooth, has gone to great depths to make this underwater adventure attractive…

…to players. The use of neon colors helps set the atmosphere and keeps the player engaged. With such a high contrast between the dark underwater cave environment and flashy neon details, the studio has managed to…

…create a magical ambient with a value of its own! Similar designs have recorded a decent amount of success at some of the largest online casinos.

The real fun starts once you look under the surface. The game features a 6x4 grid with 50 paylines. Creators of this offering utilized the Any Adjacent Wins system as well.

All of these features combined bring the max possible win at 2500x the initial bet.

As far as special features go, this slot offers a few interesting options. There are the standard wilds and extra spin modes, however, players will also have the opportunity to enjoy the Crystal Ray Feature. With it triggered, the Queen randomly expands the reels, making them double in size!

During this mode, players can potentially have symbols turn into wilds or 2x multipliers depending on their luck. There is also a bonus round feature that can…

Ben Hoffman, the President at Crazy Tooth Studio®, gave the following statement: “We can’t wait for players to experience the magic of Queen Of The Crystal Rays. The game combines an entrancing soundtrack and striking graphics to create an immersive mystic world. The captivating Queen character, colourful crystal ray blasts, and unique gameplay make for a magical gaming experience. We look forward to adding more exclusive games to Microgaming’s diverse and innovative collection in the near future.”

James Buchanan, Director of Global Operations at Microgaming, has given a statement of his own: “Following the release of Arctic Valor, Crazy Tooth Studio’s fantasy filled title is sure to receive a warm reception, as players discover an enchanted world immersed in colourful visuals and engaging features. The Queen Of The Crystal Rays feature builds on the excitement, offering an expanded reel set with crystal rays populating wilds and multipliers along their path, and offering players a rewarding adventure. “

The recent debut is the latest in a chain of successful releases for this year. With that said, the software giant has a few more titles to unleash before the end of Q4. The game is currently available at all affiliated online casinos and operators.

Queen Of The Crystal Rays
786
PLAY