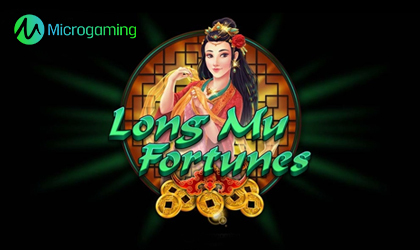 Microgaming, one of the largest software providers in the iGaming industry, has decided to treat its fans with another Far East-inspired slot titled, Long Mu Fortunes.

The game features an original, niche theme that was designed to appeal to the more traditional players. With that said, it offers several interesting special features on top of its solid base game.

The Riches of the East:

Microgaming’s latest release has been developed by Fortune Factory Studios exclusively for this industry giant. It presents a distinct Far East influence that makes this game’s aesthetic quite attractive. This rings even more true with traditional players in mind. Much like most other games with an oriental theme, Long Mu Fortunes draws inspiration from Chinese mythology.

We have seen numerous titles depicting the god of riches and other deities unique to this culture and region. This time around, we have a classic Chinese myth brought to life.

With a simple yet engaging background that radiates a warm, soothing light, players will be treated to a rather relaxing gaming experience. The background is semi-animated, making it complicated enough for it to become a proper piece of eye candy.

Symbol design includes card royals as the lower-paying tier while the higher paying tier features all kinds of gold jewelry.

The Story of a Dragon Princess:

The base game is rooted in a 5x3 grid that runs on 10 paylines. With that said, the special features built into this slot are by far the most interesting part of the whole release.

Red Dragon Wilds are part of the mix. The next important feature is the Nudging Multiplier Wild stack that is triggered during a bonus spin mode. Lastly, there is a jackpot system that can yield anywhere from 100x to 5000x the original betting amount.

James Buchanan, Director of Global Operations at Microgaming, offered his comment regarding the release: “Fortune Factory Studios has delivered an enchanting slot exclusive to Microgaming, complete with lavish visuals and a mystical soundtrack. Long Mu Fortunes is a colorful, high-volatility slot packed with exciting features. The addition of the Jackpot Feature and the Nudging Multiplier Wild stacks create an extremely satisfying gameplay experience with tremendous win potential.”

Phelan Sykes, Head of Game Production at Fortune Factory, also issued a statement regarding the game: “Long Mu Fortunes brings a classic Chinese myth to life, interpreting the legend into exciting and highly volatile gameplay. Boasting classically stunning graphics, Long Mu Fortunes is dripping with opulence and riches. We can’t wait for players to experience the power and majesty of Long Mu’s dragons and immerse themselves in the world of Long Mu Fortunes.”

As one of the oldest and most productive software providers in the iGaming industry, the supplier is complete with a massive number of slot games under its belt. The company has started taking on other providers and organized an entire army of 3rd party developers to create fresh and engaging content for their clients.