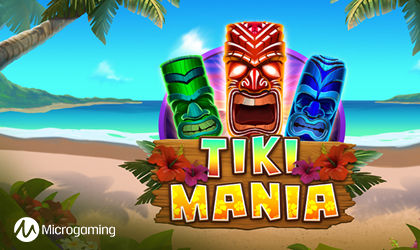 Microgaming has just broken the news that they’ll be adding another Tiki-inspired slot game to their portfolio of games. Developed exclusively by Fortune Factory Studios…

…Tiki Mania brings a great set of features in a relaxing theme.

The Party at the Beach:

The leading developer previously had great success with slot games that have the word ‘tiki’ in the title. Their Tiki Vikings was an instant success. This time around, they are looking to…

…repeat the success with a game that relies on bringing great features and an enticing theme to the fans of the one-armed bandit!

The game takes place on a sunny Beach, making it a great place to go on these cold fall days. Using a simple, cartoonish graphics style, the team behind this slot did a decent job at…

…creating an enticing visual experience that adds value to the core game mechanic and features this title offers. This cool graphics style extends to the symbol design as well. They have included all kinds of Hawaii-inspired symbols including ukuleles, native masks and more.

When it comes to the game mechanics themselves, players are getting a 5x3 reel grid that runs on 10 fixed paylines. As far as special features go, this game offers…

Phelan Sykes, Head of Game Production at Fortune Factory, said: “Creating the animated and tropical world of Tiki Mania has been an enjoyable experience for us at Fortune Factory Studios. We can’t wait for players to experience Tiki Mania, the Hawaiian party serving up exciting mechanics and colorful graphics and offering the potential for huge rewards. Collecting coins with each Red Tiki Wild builds excitement and anticipation as the chase for epic wins via the Jackpot feature gets tantalizingly close!”

Microgaming is one of the most respected industry leaders when it comes to designing and producing high-quality slot games. The company has been around since the ‘90s and is responsible for some of the key technologies the industry uses today. They have invented the first online casino software in 1994, while they’ve invented the first mobile casino software ten years later in 2004.