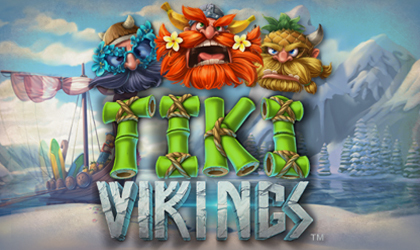 Microgaming, one of the largest iGaming content providers in the industry, has released a new slot…

…game in cooperation with Just For The Win (JFTW). The two companies have put together an impressive adventure that promises to bring potentially valuable rewards to those who take part in it.

Developed exclusively for Microgaming by Just For The Win, Tiki Vikings brings a unique combination of snow-covered Nordic forests and…

…tropical details. The game follows a group of Vikings as they return from a plundering campaign somewhere in the Pacific.

JFTW has managed to seamlessly merge two very different sceneries. Players will be presented with bamboo huts covered in snow with tropical flowers decorating the roof.

Underneath all of that ice-cold exterior, the studio behind this slot has placed a standard 5x3 base game that runs on 20 paylines. The leading developer claims a 96.01% RTP with the bet sizes ranging from 0.1 to 250.

Players who are looking for special features will find several, including the Symbol Lock Re-spin. Once triggered, all of the higher paying winning symbols get locked on the reels.

All icons can be upgraded up to the highest paying one which is the limit.

James Buchanan, Director of Global Operations at Microgaming, has provided his insight on the title: “Just For The Win have delivered yet another entertaining and highly original slot game. Tiki Vikings merges two popular themes to great effect, providing players with a colourful and fun base game, boosted with excellent bonus mechanics. The Symbol Lock Re-spin and Symbol Upgrade features add a tremendous sense of energy and momentum to the gameplay, offering the potential for huge rewards.”

Johan Persson, CEO at JFTW, stated: “Tiki Vikings is a wacky mashup that’s particularly close to our hearts here at Just For The Win. We’ve had a blast putting together a cast of grumpy but loveable Viking characters. They’re all fresh from an awesome tropical vacation, and they’ve brought the relaxed, sun-kissed Tiki vibes back home to the icy Scandinavian tundra. Naturally, our bearded friends’ Hawaiian party keeps freezing in the frosty climate – luckily for players, that means the potential for big wins!”

Microgaming is one of the largest iGaming content suppliers in the industry. The company has been around since the inception of the online casinos. As a matter of fact, they have developed the first online casino software back in 1994. The company has grown considerably since then. They have established exclusive content deals with a number of different studios.

The brand is by far one of the main suppliers on the market as well as a driving force behind innovation in the field of iGaming in general.