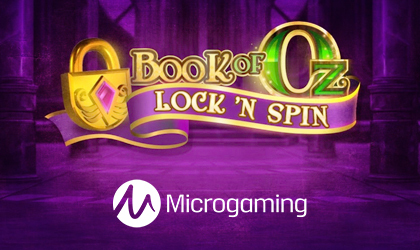 Microgaming has decided to bring back one of the most popular sagas in their portfolio with Book of Oz Lock ‘N Spin. The new game brings a lot of what…

…made the original so successful, along with a number of new features. Fans of the original will feel at home but will also appreciate the fresh take this sequel has to offer.

The Return to Oz:

…captivating experience. Just like in the original that hit the shelves last December, players will also get to experience vivid colors and thrilling soundtracks in this second installment of the series.

The new slot features a 5x3 grid that runs on 10 paylines. This is a high volatility slot which makes it an attractive choice for all players, but especially those who appreciate a more thrilling ride.

The game also comes with a few new features. Triple Edge has added the Hyperspin Lock N’ Spin option as well as the 2nd Chance feature.

Hyperspin allows players to lock up to 4 reels of their choosing and thus increase their chances of scoring a massive win. If nothing else, the ability to lock the reels means that players are more likely to trigger the bonus spin mode. Speaking of which, the bonus spin mode in this title can yield 10, 12 or 25 spins depending on what is drawn.

A Word from the Reps:

James Buchanan, Director of Global Operations at Microgaming, has also shared his insight regarding the new game: “Following the success of the hugely popular Book of Oz, Triple Edge Studios have successfully created an enchanting sequel in Book of Oz Lock ‘N Spin. Elevating the original with even more exciting and rewarding features, including Hyperspins™ Lock ‘N Spin and 2nd Chance feature within free spins. Book of Oz Lock ‘N Spin offers players high-volatility action and the potential for great rewards.”

About the iGaming Giant:

Microgaming is an industry veteran with over 20 years of experience in the iGaming industry. The company has made its debut with the world’s first online casino software released in 1994. This feat has…

…put them at the very edge of the industry in terms of new technologies. A decade later they would go on to achieve similar success with the world’s first mobile, casino software. Today Microgaming is one of the largest companies in the industry.