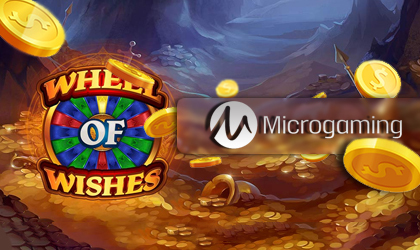 Microgaming, one of the leading slot game developers in the industry, has announced that it will be adding one more slot to its network of progressive jackpot titles.

The game in question is called Wheel of Wishes and is designed exclusively by Alchemy Gaming for the developer.

The developer’s latest portfolio addition comes in the form of an exclusive release designed by Alchemy Gaming. The game takes players on a hot adventure through the desert where they can potentially…

…win massive prizes. From an aesthetic point of view, Alchemy’s creative team did an awesome job depicting a mysterious landscape. There are several backgrounds available depending on what part of the game is active. Players will experience the…

…scorching heat of the desolate desert, the coldness of night and if they’re lucky, the hidden treasures of a remote cave. Symbols feature all kinds of artefacts as well as card royals. The entire game is brought together by a suspenseful soundtrack.

The Cave of Riches:

The game features a 5x3 reel grid and 10 paylines and has a rather familiar feel to it in terms of base game design. However, this being a progressive jackpot slot, there’s plenty more that…

…makes it exciting. Namely, there are four different tiers of jackpots available. Microgaming’s progressive jackpot network is one of the largest in the business when it comes to potential wins.

James Buchanan, Microgaming's Director of Global Operations, said: “We are delighted to present Alchemy Gaming’s debut title, and the first in a new wave of games to join Microgaming’s progressive jackpot network this year. The addition of Wheel of Wishes with its revamped WowPot jackpot is sure to set new records, while the introduction of the Power Spins and Power Mode make for a fantastic gameplay experience. We are pleased to announce that the game’s first Major progressive jackpot win has already been hit during an early release period, with one player winning €131,574.55 and total payouts across all four jackpots exceeding €1.2 million.”

Rory Harpur, Head of Alchemy Gaming, also shared his take on the release: “Wheel of Wishes combines superb graphics with intuitive game mechanics. The title’s Power Mode feature transforms the reels into a permanent Power Spin, creating an enhanced opportunity to enter the Jackpot Bonus Wheel and ultimately claim the WowPot jackpot! We are incredibly excited for the wider launch of our debut game with Microgaming and can’t wait for players to take a spin on Wheel of Wishes.”

Microgaming is one of the largest software providers in the iGaming industry. The company has been at the forefront of development ever since it was founded in the late ‘90s. It brought plenty of innovation to the industry including…