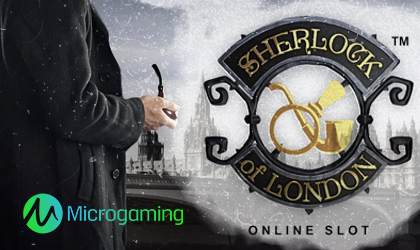 Coming straight from the Isle of Man, Sherlock of London is the latest slot game released by Microgaming. This premier software studio has been working overtime to deliver some of the best titles on the market this year. However, their latest masterpiece promises to take the cake.

The game brings everything one would expect from a classic Sherlock adventure. There are smoggy streets of London, a mystery that needs solving and a pair of experienced investigators to get the job done!

A Classic Theme Laid Over a Smooth Base Game:

One of the strongest traits of any Microgaming title is the theme. They just know how to make a game look good. To be perfectly fair, this game was developed by Rabcat for Microgaming. Most have probably heard of this studio. They are the ones who developed Castle Builder II as well as Crystal Rift.

The game takes the player on a chase across London. The objective? To catch the city’s most wanted criminals. As the player traverses the game, they are presented with amazing visuals that don’t distract, but rather add to the overall experience. Underneath all that tasty exterior hides a smooth-running game with plenty of interesting special and not so special game mechanics.

Players are presented with a 5x3 grid and 25 paylines. The game brings connecting wilds, bonus spins and double wins among other features.

James Bauchanan, Director of Global Operations at Microgaming, has offered his comment on this new release: “Sherlock of London™ provides a slot experience with wild features that heighten the action in both the base game and free spins. The mysterious atmosphere and thrilling adventures are well represented here, with excellent artwork and an evocative soundtrack.”

Over at Rabcat, the team is looking forward to the reviews and critiques that should start pouring in from all corners of Microgaming’s domain. Thomas Schleischitz, CEO, stated the following: “We are delighted to bring Sherlock of London™ to Microgaming’s award-winning portfolio. Our team have had a brilliant time pulling together the murky, fog-filled world of criminal rogues and sleuthing geniuses, and we are confident that players will have as much fun exploring the game as we’ve had creating it.”

The new title is available exclusively in Microgaming-partnered online casinos at the moment.

This latest release comes at the heels of several other titles that Microgaming launched in Q2 of 2019. On top of that, this company has been striking deals with new strategic partners all over the world. Overall, it is perfectly reasonable to say that this premier software studio and operator is having a very decent year.

From the information available right now, there are no indications that this company is done for this year. Especially when it comes to releasing top tier games. We are left to see what else Microgaming has in store for their massive and increasingly loyal user base.