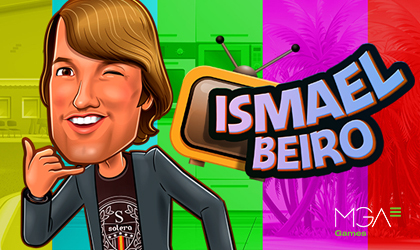 MGA Games, a company specializing in developing slots for providers around the world, has officially released Ismael Beiro, their latest slot based on the Spanish celebrity of the same name. The developer takes its inspiration for the main star in the game from Spain's oldest reality tv show, Big Brother.

The famous contest started back in 2000, the year after the first Big Brother premiered in the Netherlands, where the new TV format became hugely popular. The show was a chance for randomly charismatic people to become famous as celebrities. The contestants compete for money and are recorded 24 hours a day, while the most exciting moments are picked by producers and broadcast to the nation.

People who watched the show still remember Beiro’s kindness, which led him to victory and a future as one of Spain's most famous personalities. The creators have managed to bring his fun personality to the reels!

The new title also features 6 mini-games, the largest number MGA has built for a single production. Thanks to them, online casino punters will be able to understand more about the life of Beiro by walking inside Big Brother's house. They will be remembered for his television career and his participation in different reality shows. With the mini-slot switcher, users can easily play their favorite games.

This is a medium volatility game that has 5 reels, 3 rows and a minimum bet of $0.2 and a maximum stake of $10, while a top prize is $10,000. The slot is available on all online casinos operating in Spain that are part of the MGA network.

Based in the Parque Tecnológico del Vallés and operating since 1976, Grupo MGA is a Spanish game online casino company. It started running its business before people knew the terminology of online gambling. It manufactures and creates gaming-related machines and has an excellent reputation as an online game company.

The online game has 2D and 3D graphics, and the slots have a standard fruit theme, but most of their 3D games have a different style. They have developed bingo and slot machine games that seem to be more and more popular.