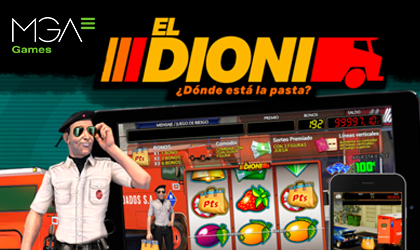 MGA Games has decided to spice things up this summer with the release of the El Dioni slot game. The new title is a part of…

… a series of Spanish Celebrity slot games that the brand is planning on releasing this year.

As expected, the game follows the title’s namesake on his adventure that involves stealing an armored cash truck. Fans of the character will enjoy his legendary antics and much more!

A Worthy Tribute to a Legend:

MGA has acquired all the rights necessary to adequately represent Dionisio, El Dioni, González. The game follows his adventures as he…

…steals an armored car full of cash. This online slot will have those interested in this man’s shenanigans properly glued to the reels.

Just like the character who inspired the game, the devloper went with a classic design. Players will enjoy a traditional 3-reel setup with fruit-inspired symbols. However…

… there is much more to this game than that.

A series of mini-games have been implemented, which contribute a lot towards player acquisition and retention. Not only that, but with 5 mini-games, they have pushed the bar that much higher for the…

…rest of the industry. Needless to say, there are potentially high bonuses to be had thanks to all of these additional features.

As a part of the rights acquired by MGA, they are able to use real audio and music from El Dioni. This ‘80s star is coming back to life with trademark catchphrases and legendary tunes…

… that propelled him to glory almost 40 years ago.

The General Manager at MGA Games, José Antonio Giacomelli, offered up the following statement: “We want to provide entertainment with fully immersive productions in which casino users feel as though they are part of the story. We achieve that with real, genuine characters with a great deal of personality, beloved by the public and capable of standing out amongst the wide range of slots flooding the market.”

This release is just one of the numerous titles that MGA is planning on launching as part of the Spanish Celebrities series.

They have acquired all the necessary rights for all games in this lineup, meaning that Spanish players will soon see some of their favorite entertainers as main characters in thrilling slot games. Until then, this latest title is available in all major online casinos operating in Spanish online markets.