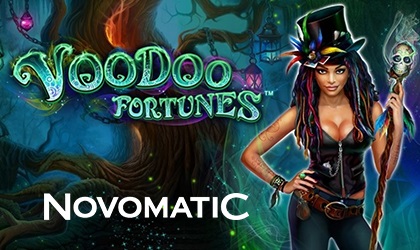 This November, Novomatic  put a spell on anyone who was present during their game presentation in Mexico City. Crown Gaming Mexico, the Mexican subsidiary of the Novomatic corporation has thrown a special VIP experience in this metropolis.

A Special Treat For The Guests:

During this event, that was hosted by W Hotel, people were able to get a glimpse of Novomatic’s products and the one that caused the fuss, was the new and thrilling Voodoo Fortunes slot machine!

Mexico gave a warm welcome to this game that was featured for the first time in this country on the PANTHERA Curve 1.43 cabinet. This allows the players to the spectacular 4K resolution on a 43in curved display.

It’s worth mentioning that this slot machine is part of the Fortunes game series and that it has impressive graphics along with entertaining gameplay. During this event, charming women dressed as priestesses and voodoo dolls were roaming around the guests, giving them a small preview of what they can expect in this reel slot.

More Interesting Details From This Event:

The good thing about these machines is the fact that they are compatible with the Enchanted Fortunes linked jackpot that comes with a four-level progressive and it can connect various titles along with multiplies of the same game.

Imperator 3.24, the black version was also shown during this event, as well as Impera Line HD Edition 6, that contains additional games such as Blue Moon and Amazon’s Diamonds.

“Our VIP Experience just gets bigger and better! The success of this third edition was due to our wonderful customers and, of course, to our amazing team. The growth we have experienced in the last few years is a reflection of hard work and NOVOMATIC’s willingness to take risks and innovate every day.”

Furthermore, Lawrence Levy, VP Global Sales Novomatic added that Mexico is very important for their company and its market is very appealing to them. He said that they’ve had a very good year together but that he is absolutely sure that the next one is going to be even better!

Generally speaking, Mr. Levy loves these types of gatherings, because they allow them to show some form of appreciation and gratitude towards their customers and at the same time show them new, attractive products.

Greentube Goes Live with Lord of the Ocean 10 Win Ways