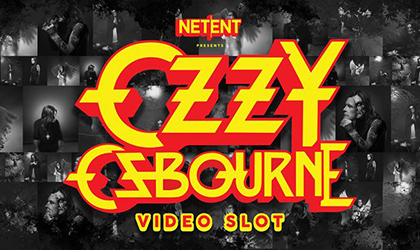 One of the biggest living legends in the world, Ozzy Osbourne, has done so much for heavy metal and music in general that he absolutely deserves to get his own game.

It looks like we are not the only ones who think that, therefore, one of the leading suppliers in the gambling industry, NetEnt, decided to pay tribute to one of the most popular musicians of all time by developing the aptly named slot, Ozzy Osbourne!

Many Reasons To Love Him:

Before we continue with this news, we would like to share some important information regarding this artist.

He established one of the best rock bands in the Universe, and it’s one you may have heard of - Black Sabbath! The band rose to fame in the late sixties.

Furthermore, Ozzy alone sold over 100 million albums. Because of his image, as well as his music, people deemed him, The Prince Of Darkness.

Let’s get back to our main topic. Fans of this legend will be thrilled to know that besides phenomenal graphics and design, they will be able to fully enjoy Ozzy’s recognizable vocals. It will make them feel like he is singing to them.

Other popular legends, such as Jimi Hendrix as well as Guns n’ Roses already have their own video slots powered by NetEnt.

That means that this one is going to be a perfect addition to their gaming, virtual version of Hall of Fame.

His witty personality and phenomenal music career were the main reasons why they decided to honor him this way.

“Rock stars don’t come much bigger, better known, or charismatic than Ozzy Osbourne. Thanks to his larger-than-life personality and outstanding contribution to music, Ozzy has developed a loyal and passionate following over the past 50 years – we can’t wait to bring this to the reels for players to enjoy.”

The mediator between this company and the singer was his merchandising and brand management partner, Global Merchandising Services.

They also expressed their opinion regarding this collaboration and said:

“NetEnt are the market leaders in their field and we’re incredibly excited to add another of our artists to the exciting NetEnt Rocks family of games.”