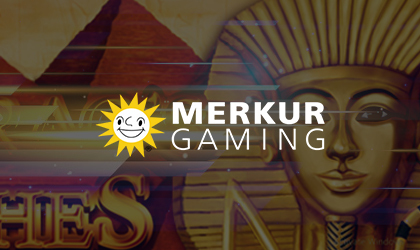 Merkur Gaming, a rising software provider and slot game specialist, has announced the release of three new and exciting games. The company’s latest releases brings a mix of various themes, all of which boast a rock-solid core game and a number of cool features.

From African Savannahs to Tropical Islands:

The developer has been working hard on releasing new and exciting content. So much so that 2019 has proven to be a very successful year for this brand. Their appearance at ICE London has…

…been deemed by some as a good omen and they were correct. After a highly successful showcase at ICE, the brand has been reaching all of their business goals.

The release of these three new slots is only one of the steps in a long term plan this company has implanted.

Maja Cvetkovic, the Business Development Manager – Online at Merkur, offered an insight into the new content: “Our newest releases, African Mask, Dreaming Island and Tribe Of The Sun, all deliver on our usual strong passion for details of classic casino games with an online twist and will for sure match players’ expectations as they combine unique mathematics and in-game features in fun and exciting ways.”

This 5-reel slot with progressive row design features great graphics that add a level of immersion to the game. All things considered, the African vibe is very strong with this one.

“We wanted a game which takes players to the wilderness, the pure nature and the beauty of Africa. After fighting wild animals and finding the right way through the jungle, the legendary African Mask releases its mysterious powers,” read a statement from the company.

The next slot release is Dreaming Island – a completely different beast altogether. This game features a radiant, relaxing atmosphere of an island, but one that hides many treasures. In other words, definitely something more experienced online casino patrons will appreciate.

Cvetkovic said: “Dreaming Island offers 720 ways to win, in addition to the thrill of having a wild joker and multiple scatter symbols. For players, it is important to pay attention to the silver goblin, as it is scatter and pays on any position on the screen. But there is also the tropical bird as another scatter symbol. While flying around the Dreaming Island the bird triggers eight free games when five birds fly on the reels. During the free games, the king of the sky multiplies the number of free games by the number of birds flying on the reels, starting even when only one bird appears. That means all the island’s secrets can be revealed and the player is awarded with up to incredible 96 free games! Dreaming Island is a dream you will not forget!”

With all of its features and stunning graphics, this title is perfect for players who appreciate the depth that extends past a solid core game experience.

Tribe of The Sun:

Lastly, there’s Tribe of the Sun with its 30 fixed paylines and a story that follows the medicine man of the tribe as he learns new things about his community and where its future lies.

“In Tribe of the Sun five reels meet 30 fixed pay lines to make the first part of the prediction come true,” Maja said.

“Each win is accompanied by a loud drum roll with which the tribe shows its appreciation to the player.”

So far, all three games have been praised for various reasons. It is safe to say that Merkur has prepared a strong finisher for a very successful year.

FunFair Games takes players to the future with CyberHunter 2080