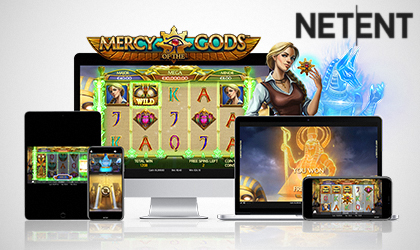 Ancient Egypt has been at the center of many adventures, both real and fictional. Ever since the pyramids were discovered, mankind has been obsessed with the secrets of the Pharaohs and mysteries of pyramid builders.

NetEnt broke the news of a new slot game that takes part in this great mystery. Titled Mercy of the Gods, their latest release takes the player on an exciting journey where they’ll meet Isis, the goddess of life as well as Anubis.

NetEnt is easily one of the most prolific software providers currently on the market. They have established such a legendary reputation thanks to the amount of effort and detail that goes into their games.

This latest release is promising to be no different. The game features an incredibly detailed theme that depicts an entrance to an Egyptian pyramid complex. With an animated background which includes recumbent statues of Anubis – the ancient Egyptian god of death and afterlife – the game establishes a rather immersive atmosphere.

Frame and symbol design is the same. The developer seems to have cared for every little detail and it shows.

This game’s base mechanics feature a familiar platform that NetEnt has used before. NetEnt’s Director of Games, Bryan Upton said:

“Built on top performing Divine Fortune game mechanics , our casino partners can expect a strong performance from our latest release. We’ve added some high variance and created a polished and beautiful Egyptian style art package. The mercy of the Gods is a top-quality proven performer and I’m looking forward to what our players think about it across our network.”

Even though the title doesn’t boast innovative features, it is likely to appeal to anyone who appreciates a well-oiled, smooth running slot experience.

Upton’s comment not only expresses the company’s optimism regarding this title, but it also reveals that the game has a potentially thrilling side to it. The mystery of the Gods is currently available on select online casinos partnered with the brand as well as their own network.

This game is just the latest addition to NetEnt’s ever-growing portfolio. So far, they published several high-end, polished games, all of which have achieved great success. Where this studio truly stands out from the competition is that they have shown the ability to release games in quick succession all while maintaining the established standards of quality.

That trait has netted them a number of awards over the years. 2019 Q4 is looking very good for this company, especially with new games rolling out fairly regularly.

About the Leading Supplier:

The company is one of the oldest and most successful online casino operators in the world. They have been in business for over 20 years, always managing to remain on the cutting edge of technology. The team behind this successful name consists of talented and highly motivated professionals who understand the market, and more importantly, the players themselves.