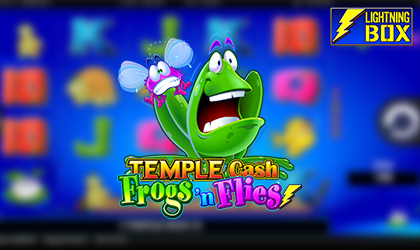 Action-packed games that are filled with interesting features and an unforgettable adventure are always on point, hence, one of the most creative video slots providers, Lightning Box has decided to give the players the time of their lives.

Learn More About It:

This one is called, Temple Cash: Frogs’ N Flies, and it is a typical fast-paced game where there’s no time for rest!

It comes with 1024 pay ways, as well as with 4x5 reel and with an alluring, jungle theme where one of the most thrilling features is Temple Jackpot bonus game.

How do we activate it? We can do that by landing three temple characters between the reels.

Once this occurs, players must choose how they will overcome six difficult challenges that the temple gives.

Their goal is to reach the top and trigger the Jackpot Round. Besides it, they will also stumble upon another symbol that can be blasted-off via three, four or five Bonus symbols. All of them are triggering five, ten or even twenty extra games, with additional Fly Wild icon adding to the existing Frog Wild characters.

When Can We Expect It?

Those of you who are impatiently waiting for this moment, we’ve gotten some useful information for you.

Namely, it will be released during an initial two-week exclusive basis across the White Hat Gaming brands, including Templenile and 21 Casino. Keep in mind that this is not an official release.

“We’re delighted to release our latest title, Temple Cash-Frogs ’n Flies. Its fun, explorer theme and exciting bonus feature means we are confident both casual fans and ardent players will enjoy spinning in search of treasure. We have had plenty of success with exclusive games, and we are thrilled that White Hat will be taking on Frogs ’n Flies for the first two weeks. We are sure their players will love it.”

Mike Dearling, Head of Product at White Gaming, expressed his satisfaction with this collaboration by stating:

“We’re delighted to be getting our handson Lightning Box’s latest creation first and reckon it will be a big hit with our customers.”

It seems like Lightning Box loves to create silly and quirky games. One of their latest games, called, Chicken Fox, was as equally giddy and entertaining as this one. We are looking forward to getting more titles from them!