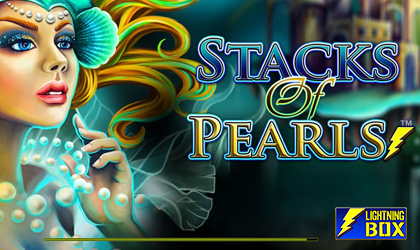 Lightning Box, a Sydney-based software studio specialized in creating innovative slot games, has released another awesome slot titled, Stack of Pearls. The game has hit the…

…market as a Kindred Group exclusive but is now available to wider audiences through Microgaming’s distribution network.

The studio’s latest slot takes players on a thrilling Underwater adventure where all kinds of riches, as well as creatures, lurk just below the surface. Since this is an aquatic-themed slot, all of…

…the graphics depict an idyllic underwater scene. Players who decide to give this slot a shot will be treated with a peaceful, yet somewhat suspenseful background that depicts the seafloor with all of its wonders.

All kinds of aquatic life surround the reels as players try to navigate their way to a winning combination. Symbol design is slightly unusual compared to what most are used to. Instead of going with the usual card royals, the supplier has decided to use various mythical characters in combination with several multiplier symbols.

Needless to say, those who are fans of aquatic slots will feel right at home with this release!

The Riches from The Sea Floor:

Underneath all of that relaxing exterior hides a game that has enough potential to make someone’s day. Based on a 5x3 reel layout and 30 fixed paylines, the game is all about a smooth core experience. As mentioned before, the addition of multiplier symbols means that players can potentially win up to a 27x the original bet.

On top of that, there are also special features such as the Respin Bonus that is triggered when reels are lined up with wilds and wild multiplier symbols.

The fact that the developer chose not to rely on a unique mini game of some sort to make this slot exciting shows its unique approach to building slot games.

Peter Causley, CEO and co-founder of Lightning Box, had this to say: “It looks like there’ll be a bit of a motion in the ocean with our newest game Stacks Of Pearls – a journey to see what lies beneath the waves. There are some really big wins on offer with our Respin Bonus feature meaning players could be in for bumper payouts.”

The company has made this latest release available to online casino operators within their distribution network including Microgaming.

Lightning Box is a Sydney-based slot game specialist that has been delivering some of the most unique games to the market. The company was founded in 2004 by a number of veteran game developers who wanted to create an environment in which they could freely work on their innovative ideas. Needless to say, the studio has been doing exactly that for the past 15 years. This team’s reluctance to compromise has brought them a number of partnership deals with some of the best online casino operators in the world.