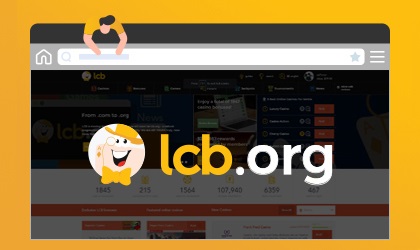 Times go by, things grow and evolve and, eventually and consequently, a need for a new identity is born. You already may be familiar with the fact that FCG is an integral part and parcel of the vast LCB Network that encompass websites of diverse nature.

Directed to one goal:

Making the WebSphere a significantly better place for iGaming lovers, one update at a time.

Seeing how LCB Network has been growing steadily and gradually and has by now become the unassailable force in the world of iGaming, the time felt right for the next stage in branding evolution.

Thus, LCB Network’s flagship website – latestcasinobonuses.com – has been, as of August 20th, rebranded into LCB.org.

Numerous are the reasons we could list for this name change, but essentially, it boils down to several main motivators and reasonings behind each part of the new LCB.org brand.

First, the "LCB“ – the ascent of Latest Casino Bonuses has been 12 years in the making. When the team behind it founded the site in 2006, there was a stern hope and determination that it would be where it is today.

Multiple awards have been reaped (IGB Best Overall Affiliate in 2014 and Best Casino Affiliate in 2013 and 2014 are the most notable ones) and, above all, the trust and affections of more than 100,000 registered users on the LCB Forum.

All thanks to the inexhaustible efforts by the team of admins, live support, representatives, authors, designers, engineers and everyone else.

During this period, the acronym LCB has become instantly recognizable and synonymous with the high level of service and site’s unique approach to coverage of all casino activities on the planet (and that’s no exaggeration).

...began referring to the site under the shorter acronym and this catchy and brief name is now the cornerstone of the brand and its new URL.

The Pride of Organization:

Over the last few years, more and more websites have turned to the flock that is the LCB Network, to the point that it has now become a true conglomerate of interconnected sites with a purpose – a true force to be reckoned with.

Having surpassed the status of a single website on a mission, this has now become an organization through and through.

That of the ".org“ extension – the one that stands for the organization, a company with history, present, future and, most importantly, strong values that we feel are most appropriately embodied by the brand new LCB.org URL.

It also reflects where LCB stands in the pecking order of the iGaming industry – and aiming even higher still.

There is much more to LCB Network than one could write in a simple article as this. If you’d like to read more on the history and possible future paths LCB could go down, visit this page.

You will see that this success and this incredible ride was all driven by you, our readers and active users – you have always been our rocket fuel and together we can and will explore the unexplored!