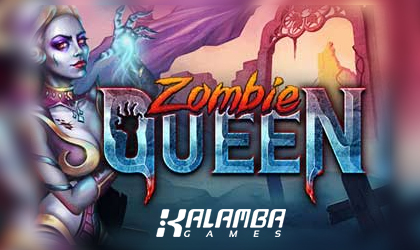 Kalamba Games, an innovative software provider operating within the iGaming industry, has announced the release of a new…

Bringing the Night to Life:

Kalamba Games’ latest title combines an engaging theme with a set of rather unique features this company is known for in the industry. Set in a graveyard illuminated by nothing but…

…stars, this slot has a proper horror vibe to it. The studio behind this release has made sure that the visual aspect of the game is on point.

Every detail, from the background graphics to the rolling fog that runs along the bottom of the screen, adds more to the overall immersion quality. However, it is the animated portion of the theme that truly gives this title that horror value. Players brave enough to take on this slot will see Zombie arms randomly popping from the nearby graves, slowly coming back to life.

The game runs on a 6x4 grid that utilizes 50 fixed paylines. Such a base game configuration offers an interesting experience right off the bat. However, since this is a Kalamba release, players can look forward to experiencing their unique features. Namely, the studio has added its well-known HyperBet and HyperBonus features.

HyperBet allows players to control just how interesting the game gets by adjusting the value of the wild multipliers. On the other hand, HyperBonus is there to allow players instant access to the bonus spin mode.

Overall, the base game is capable of delivering a max potential win of 1930x the original bet.

As far as special features go, there are several worth mentioning. The brand has gone with walking wilds as the main attraction in this game. Additionally, there is also the classic bonus spin mode.

Alex Cohen, COO and co-founder of Kalamba Games, offered a comment regarding the release of the new title: “The Zombie Queen brings the fun-filled graveyard theme in this spooky slot to life and we’re certain her character will be an instant hit with players.

“The new Walking Multiplier Wilds in Zombie Queen, coupled with our proven signature features, make this a highly engaging title for any portfolio, offering multiple levels of anticipation and excitement that boosts operator revenues with strong player retention rates.”

Kalamba is a software provider that takes pride in offering innovative solutions to the iGaming industry. This company’s slot titles are often riddled with cutting edge graphics, engaging features and more. Founded in 2016, it represents one of the youngest developers in the business. However, the company has managed to earn the respect of its peers as well as end-users from all over the world. This can partially be attributed to their policy of releasing one game per month at the minimum.