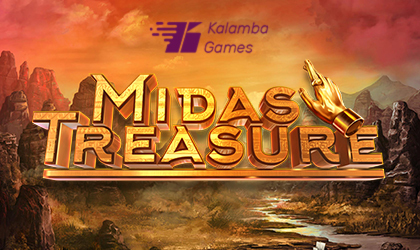 King Midas – a man driven by greed – is known for turning everything he touches into Gold. His story and subsequent demise are well-known. However, what would you do if he wasn’t a fictional character but a real person? What would you do if you stumbled across Midas’ treasure?

Whether this myth is real or not is something we won’t get into. That being said, if you are still interested in this story, Kalamba’s new slot titled, Midas Treasure, could offer a consolation prize. The news of this highly anticipated release was broken somewhat suddenly by the developer’s press department.

The Land of Gold, Marble, and Jackpots:

With an ancient Greek theme, the game sets the scene for what is promising to be a rather unique experience. The software studio behind this title has been known to take things to another level in terms of graphics. The title of the game hints at scenery filled with gold and that is exactly what it offers.

Kalamba has hinted that this latest addition to their portfolio comes with all of their signature features. The game is based on a 5x4 grid and offers a number of different multiplier options, originally thought out wilds and bonus jackpots.

One of the supplier’s signature features comes in the form of a built-in shortcut. Namely, the player can decide to buy the HyperBonus feature and gain access to various in-game benefits. It is believed that this feature alone is responsible for a portion of this studio’s most recent success.

“With 40 pay lines and multiple jackpot levels, Midas Treasure offers a high volatility gaming experience with a classic theme sure to drive customer engagement and retention.”

Surging in popularity, more volatile online slots are slowly gaining momentum among casual players as well as experienced ones. Cohen’s comments further add to this point:

“We are confident that this adventurous game will be loved by both advanced and casual players as it’s packed with hit features including our proven HyperBet and HyperBonus.”

Kalamba is one of the rare studios to introduce an option for players to simply buy certain features. HyperBonus is a built-in shortcut that players can use to purchase whatever bonuses the game offers. These can be bonus rounds, different multipliers and more depending on the title.

HyperBonus features often come in different tiers – each sporting a unique price. That way, the player has the option to purchase features even with a limited balance.

Initially introduced during the Bangkok Nights release, HyperBonus has become an integral part of this studio’s games. You can see it in Doctor Electro and other titles in their portfolio.

HyperBet is a similar shortcut solution that enables the player to select the value of a multiplier wild. Although it is not quite a surefire feature like HyperBonus is, HyperBet gives the player more flexibility.