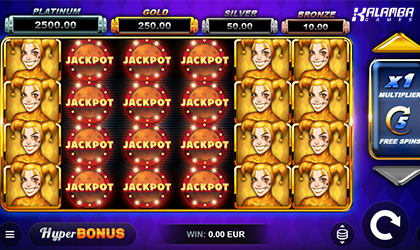 Kalamba Games has released a brand-new slot game titled, Joker MAX, that is all about optimizing the win potential. The game brings a nostalgic experience to fans…

…of a classic Vegas-style slot, while its features ensure that there’s plenty of potentially lucrative prizes to win at the end of the day.

Going for the Traditional Vegas Experience:

The latest release is set to surprise the fans of old school Vegas-style video slots. If you’ve ever played a classic Joker themed slot in a land-based casino on the strip, you’ll most likely…

…recognize the vibe the title radiates so well. The game is visually stunning in an unconventional sense. Where most slots these days try to woo the player over with intricate themes and detailed graphics, this one went for the good old bling factor.

In other words, players can expect a myriad of bright colors, flashing lights and all kinds of shiny animations. Even though it may come across as tiresome on paper, the game has this unique vibe to thanks to those graphics.

Where things get a lot more concrete are the symbols. This being a classic slot means that most of the symbols are designed in the traditional fashion. Players can expect to see…

…a mix of fruits, four-leaf clovers, BAR symbols, lucky sevens and others. Of course, there are also the Joker symbols. After all, this is a Joker game. The overall visual experience looks promising!

Features Make All the Difference:

The offering runs on a 5x3 reel grid and 40 fixed paylines. As far as the core game goes, that’s nothing unusual. It runs smoothly despite somewhat heavier graphics, which is always a bonus. However, the real star of the show are the special features and there are several of them.

For starters there are various multiplier wilds players can choose from. The game allows you to manually set the multiplier, which also changes the number of bonus spins you’ll get if you hit the bonus spin mode.

Then there’s the Bonus Jackpot with its four tiers of prizes – bronze, silver, gold and platinum. Last but not least, while you’re in bonus spin mode, you’ll occasionally get a BONUS symbol drops on the reels. Collect three of these symbols and you’ll be awarded 3 extra bonus spins!

Alex Cohen, COO and co-founder of Kalamba, said: “Joker MAX is a top-end volatility slot with a classic theme and massive potential returns. By building on the successful theme, mechanics and mathematics used in Joker Supreme, we are sure Joker MAX will be another huge hit with players across multiple demographics.”

Kalamba Games was founded in late 2016 by a group of likeminded professionals who saw an opportunity to offer something new to the market. The company…

…has since been creating immersive slot games that deliver innovative features as well as innovative math models. Known for its 12-releases-per-year schedule, it has grown a considerable distribution network.