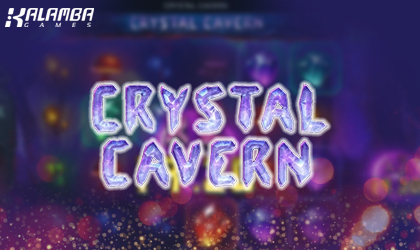 Kalamba Games, a popular slot game provider, has announced the release of a brand-new slot game titled, Crystal Cavern. The new game brings a number of awesome features as well as graphics that make this slot a truly awesome visual experience.

The latest slot release takes players on an adventure deep inside dark and gloomy caves. However, there’s nothing scary about this expedition. On the contrary, the game is packed full of…

…interesting features that may just change someone’s day for the better. Although it’s all about spinning those reels, one of this game’s strongest traits are its graphics.

The creative team went above and beyond in creating an atmosphere that is immersive and easy on the eyes. As the title suggests, this slot’s theme revolves around caves and gems. Instead of going for…

…dark and damp scenery, the team went full neon. As a result, the game is full of awesome colors and minerals that glow in the dark. The same goes for symbol design. Instead of card royals, Kalamba went with glowing neon minerals and fungi.

The whole experience is rounded off with a soundtrack that brings the mystery factor to a whole new level.

Features that Make the Game:

The title is a 6x4 slot that runs on 4096 ways to win. Despite a fairly lucrative base game, the developer has upped the ante by adding a number of special features. To start things off we have…

…their proprietary HyperBet mode. Then there’s the bonus spin mode with various multipliers. Last but not least, players can look forward to the Cash Orbs feature that allows them to maximize their winnings.

Alex Cohen, COO and co-founder of Kalamba, commented on the new release: “Crystal Cavern has a captivating theme with atmospheric sounds and sparkling symbols that transport players deep into the game’s action. With the perfect blend of monetization and engagement features, our latest slot game is a great way for players to kick back and enjoy the mesmerizing gameplay with huge potential wins.”

Kalamba is a software provider specialized in creating high end slots and other gaming content for the iGaming industry. The company was founded in 2016 and has since...

…built a large portfolio of games. It is currently working with a number of top tier operators all over the world and provides quality entertainment to customers in key regulated markets. With a team of talented and dedicated professionals, it is promising to rise through the ranks in the industry, becoming a true figure of authority when it comes to innovation in slot game technologies.