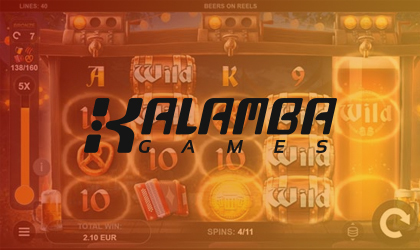 Kalamba Games is rolling in a barrel of beer with the release of Beers on Reels.

…aesthetic. Aside from quenching the thirst with its theme, the new game also brings interesting features that make the gameplay every bit as awesome.

The latest release brings the perfect refreshment for this summer’s hot days. The team behind this release went above and beyond when designing the theme for this one.

As the game loads, players will find themselves…

…in an old tavern, surrounded by tables and barrels of beer. The timeline sets the scene at least 100 years in the past, if not more. The background design is highly detailed and semi-animated.

…subtle animations such as the dust rising under the light of lamps, as well as the fire burning in the fireplace far behind the reels.

Symbol design is stylish and matches the whole theme very well. The brand’s team went with a German font for the lower-paying card royals. On the other hand, the higher-paying set includes pretzels, wurst sausages, and other iconography that is often associated with Oktoberfest.

The new release is a 5x4 slot game that offers a fairly thrilling base game experience.

Players can rely on 40 fixed paylines to potentially win decent…

…rewards. However, it’s the special features that arguably make the game. There are several features that could potentially make someone’s day. Things like a Bonus Spin Mode with expanding wilds is just the start. There are also the Missions – a feature where players stand to trigger different bonuses during the bonus spin mode.

At the end of the day, all of the features combined offer a decent boost in terms of one’s chances of scoring a win!

Alex Cohen, COO and co-founder for the developer said: “At Kalamba Games we pride ourselves on designing games that players want to play time and time again, and Beers on Reels’ inviting theme and exciting features were created with maximum enjoyment in mind. For those who love to spin the reels quickly or for those who just enjoy a leisurely play, Beers on Reels is a game that appeals to every type of player and would be a great addition to any operators’ portfolio, especially with the real Oktoberfest canceled this year. This is the next best thing.”