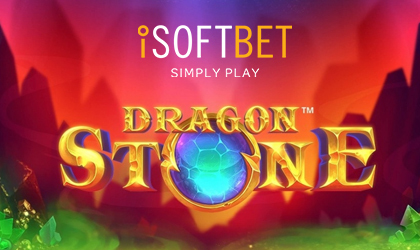 iSoftBet has released a brand-new slot game titled, Dragon Stone. Their latest creation features great graphics combined with interesting features and a solid base game. The team behind the title…

…has taken inspiration from the magic beasts that are said to have once ruled the skies.

Dragons have always been an interesting topic, especially to those who aren’t afraid to think outside the box. iSoftBet has taken the same interest, translating this idea into a visually impressive slot.

The theme this title brings to the table puts players on top of a mountain only reachable by winged creatures that roam the skies.

With the graphics taken to the extreme, the supplier has taken player immersion to a whole new level. The background features a beautiful horizon that spans for miles in every direction. With nothing but the stars illuminating the night, the rolling fog that covers the valleys gives perfect contrast for the shadows of colossi. There are plenty of shadows in this title. Namely, the creative team behind the release has added…

…random dragons that fly through the background scenery, casting massive shadows below them. This gives the game plenty of depth, both visually and story-wise.

That high-quality of graphics extends past the background scenery. The frame and reels are also affected. With lower-paying symbols featuring the standard card royals, players are left to admire the awe-inspiring higher-paying set that depicts various dragons in incredibly high detail.

Aside from the awesome graphics, this game runs on a smooth base game package. It is a standard 5x3 setup with 20 fixed paylines. Special features…

…are present and include the Elemental Power Spins which include Flaming Wilds, Ice Storm Spins, Earthquake Reels and Winds of Winnings. There is also the classic Bonus Spin Mode.

“We are delighted to release our latest wild and wondrous slot, Dragon Stone. With a gripping setting, thrilling features, and great win potential, the mystical lair of the dragons can be the site of great wealth for our players,” Michael Probert, the developer’s CCO stated.

“Dragon Stone has become an instant classic with our players due to the popular theme and multiple bonus round options. Feedback has been extremely positive across all our player groups. Thanks, iSoftBet – we cannot wait for the next exclusive release,” Jones Stuart, CRM head of Go Wild said.

Dragon Stone will be available across all partnered online casinos.

iSoftBet is an iGaming content provider that works with both mobile and desktop platforms alike. Their portfolio of games includes some of the…

…most successful titles on the market at the moment. Aside from slots, this company is also known for its award-winning content aggregation platform that offers a wide variety of content from over 50 leading software providers.

The team behind the brand is doing their best to stay on the cutting edge of technological advancement in the industry, thus setting the example for others.