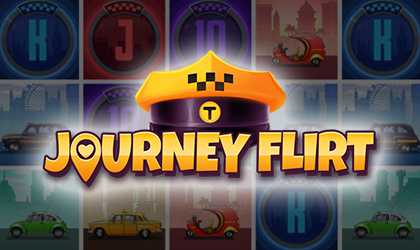 Have you ever wanted to just pack a suitcase and take a trip around the world? If so, chances are that you’ll absolutely love Journey Flirt – a new title from BGaming. This thrilling adventure…

…puts you right in the middle of one such adventure whose main protagonists are a Taxi driver and her partner, John.

Taking the World One Country at a Time:

BGaming has put together a thrilling adventure for fans of traveling, romance, and potentially rewarding features. The game has a very compelling storyline that is made complete by a highly detailed theme depicting various details from the story. The title follows Faith – a young taxi driver thirsty for adventure who has decided to embark on a trip around the world, and her partner John who shares her interests to the fullest. Together they are hopping from one city to another, experiencing the world in all of its beauty.

The plot is also reflected in the slot theme itself. Players will find the background changing depending on which city the action takes place in. The scenery will change to depict…

The higher paying deck is depicted by taxi cabs specific to each of the four cities the game takes place in. In other words, players will see the legendary Black cab from London, a vintage Yellow cab from NYC, a Green Beetle cab from Mexico City and a small red cab from Havana.

When it comes to base game mechanics, the new release is a standard 5x3 reel slot that runs on a 243 ways to win system. As far as special features go, players will start unlocking the aforementioned cities one by one.

On top of that, there are four special features that stand out. There is the Sticky Wild feature, fixed multipliers, bonus spins, and expanding wilds. All of these add an extra layer…

…of gameplay experience to an already interesting slot game. The game will be available at the developer’s affiliated online casinos starting October 4th.

BGaming’s story starts back in 2012 as a part of SoftSwiss – a software company that offered a variety of services to the iGaming industry. From 2012 until 2018 they have been building strong ties with some of the largest players in the industry. In February of 2018, SoftSwiss rebranded its game content division.

The already talented team has gained a boost they’ve needed. As a result, the brand designed and produced some of the more captivating online slots and table games. With full support for cryptocurrencies as well as compatibility for all kinds of platforms, its portfolio of games became a hot commodity.

Today, the company is actively working on expanding its network of distributors even further and gaining more exposure as a whole.