iSoftBet To Showcase Book of Immortals 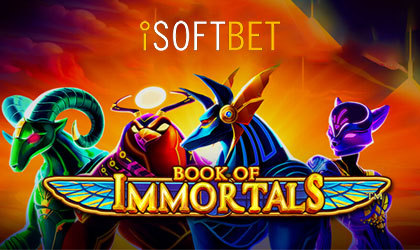 We all know that popular song by Queen, titled, “Who Wants To Live Forever,” and that’s one of the questions most of us have a tendency to wonder about.

Since science hasn’t gone that far and we are still mortal beings, it’s interesting to get a glimpse of a world where being immortal is not an unusual phenomenon. In the latest video slot by iSoftBet we just might be able to see what it’s like to live forever.

The game is titled, Book of Immortals, and it obviously drew some inspiration from Egyptian mythology due to the fact that in this slot, all characters are representative of its culture.

The title comes with five reels and ten pay lines and gamers will stumble upon various gods and goddesses from Egypt’s past, such as God of the Dead Anubis.

A Variety of Symbols:

The segment that must be praised is its design. iSoftBet has really done an amazing job when it comes to graphics and appearance.

We loved the lucky scarab sign that is filled with hieroglyphs. Here, it represents the wild character.

If more than three of these icons are seen across the reels at the same time, they will trigger the Casino Spins mode!

What happens during this special feature? One special symbol is picked and if a certain number of them hit the reels they will expend to create wind on all ten pay lines. This include non-adjacent reels too!

And That’s Not All…

Furthermore, these signs can also activate a completely new, extraordinary character! A thing that is going to further improve the gaming experience is a God symbol.

Namely, if any of them are chosen as the special icon, they will instantly become immortal. What will happen then? Once this occurs, these signs will pay as expanded symbols for the entire slot spins round, meaning that they could potentially help players earn some whopping cash prizes!

For those of you who are impatiently waiting to play this game, we have some great news! This slot machine is now accessible to more markets all over the world, following the termination of an exclusivity period with Swedish operator, LeoVegas.

“We are delighted to announce that after a successful exclusivity period, Book of Immortals is open for general release to our wider partner network. With its fearsome characters and captivating graphics, we are looking forward to Book of Immortals holding an important place in our portfolio for years to come.”

This one, just like all their games can be played in both portrait and landscape modes when run on mobile devices and it comes with a vast range of language and currency options.