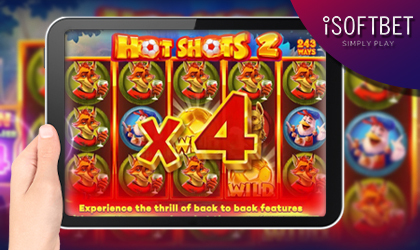 iSoftBet, one of the leading software providers in the iGaming industry has announced the release of Hot Shots 2 – the much-anticipated game that is following the success of the original Hot Shots.

The team behind this release has decided to give players the second half time they deserve!

Hot Shots Goes for Round 2:

The supplier has delivered as promised, releasing the sequel to the now popular Hot Shots slot game.

The company has not only given the fans of the original a worthy sequel, but they’ve also…

…introduced a new feature that gives the game a spicy vibe. As far as aesthetics go, the new game brings a lot of awesome graphics. The action takes place deep in the forest among the trees where the sunlight breaks through the treetops.

The background is also animated with plenty of little details adding to the overall atmosphere. Players can spot the audience sitting at the bottom of the screen, cheering for their favorite team as they duke it out under the sunlight.

The symbols come in the form of card royals in the lower-paying tier, while the higher paying tier is all about various animals dressed in jerseys.

The new release is a 5x3 slot game that runs on 243 ways to win mechanic. The game features plenty of relatively exciting base game features including the wilds that expand vertically and carry win multipliers.

Then there’s the Bonus Spin mode as well as the innovative Ultra Bet feature. The latter allows players to unlock 50 bonus spins with a single wager.

Head of Games at iSoftBet, Mark Claxton said: “Hot Shots was so popular we decided to launch a sequel with a supercharged bonus for players to score even bigger wins. Launching our new Ultra Bet feature on this game made perfect sense as it embraces the exciting and frantic nature of the “beautiful game” while also offering players a whole new way to play slots. “The launch of Hot Shots 2 is perfectly timed with the restart of many football leagues around the world, something so many people have been eager to see. We are delighted with the result of the game and confident it will prove to be the perfect strike partner for sport-starved slot fans.”

iSoftBet is a premier software provider that has made a name for itself by building attractive mobile casino games. This company’s portfolio includes a number of highly popular slot game titles, including the original Hot Shots. It also runs one of the largest content aggregation platforms in the industry – GAP.