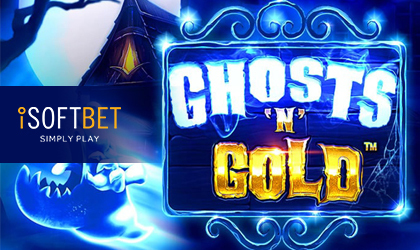 iSoftBet has announced the upcoming release of a brand-new slot game titled, Ghosts ’N’ Gold. Packed with all kinds of interesting details and a…

…paranormal theme that promises to satisfy even the most demanding thrill seekers.

Cranking Up the Spook Meter:

iSoftBet is known for putting effort into making their games look attractive. However, the new title promises to push that reputation to a whole new level. The company has announced the details of their latest game and it looks impressive.

The theme is definitely one of the more interesting aspects of the game, with its intense graphics, immersive design and attention to detail that puts the whole game one step above all expectations. The background features a spooky village illuminated by nothing other than moonlight and flickering lanterns. Everywhere players look, they will notice horror-inspired details.

Whether it is the crow weathervane, the figure that appears in the window of the house, or the headstone-looking objects on the right side of the reels, there is no…

… mistake that this is a horror game through and through.

The studio behind this slot has tied everything together perfectly using a fully animated flowing mist that gives the entire scene a lot of immersive depth. As a matter of fact, a number of details are animated, all of which add to the overall experience.

Symbol design features card royals and various jewelry as the lower paying deck while the higher paying deck of symbols is represented by ghostly characters.

With that said, the theme and visuals aren’t the only attractive feature this title has to offer. The base game is quite interesting on its own. Fans of unusual slots will appreciate the 3-6-6-6-6 reel layout that runs on up to 3,888 ways to win.

As a matter of fact, players have a chance to potentially net a win that measures up to 12,960x the original bet. The potential estimated RTP hasn’t yet been announced, however the game looks like it is a medium volatility title.

As far as special features go, the game is heavily relying on bonus spins. In fact, there are two bonus spin modes – the Wild Ghost Spins and the standard Bonus Spin mode. Former is triggered randomly during the base game and can award anywhere from 3 to 8 bonus spins. The latter requires 3 or more bonus symbols to trigger and can yield 8 to 18 bonus spins.

iSoftBet is a software provider specialized in delivering high quality mobile and desktop slot games to its partners. Based in Romania, this company offers a large variety of content developed in-house as well as from 3rd party providers. This is because it runs one of the largest content aggregation platforms that is partnered with over 50 leading software providers.