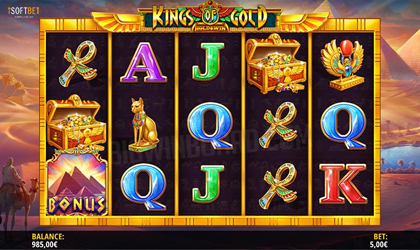 London-based provider, iSoftBet, has released a brand-new video slot game Kings of Gold. The provider puts players in an adventure where the action takes place in ancient Egypt. Between pyramids, players will fight for treasures such as jackpots and huge wins.

The slot has a standardized 5x3 grid with 25 active paylines. Punters can place bets between $0.25 up to $25 per spin. This is a high-volatility game combined with an RTP of 95.14%, which is below the average. The title has rewards reaching 1121x the bet.

Three pyramid Bonus symbols activate the extra spins feature, where the feature in-sync is active, which is between two and all five reels spinning in-sync with identical symbols, guiding to potentially enormous wins.

The title has another Bonus Round, the feature popular among the Hold & Win engine. If the player gets 5 or more Gold coins, the Hold & Win feature gives 3 respins, and the coins stay stuck on the reels. Additional coins reset the respins, and Golden Pharaoh will gather all available coins, which provides punters more opportunities for extra wins.

“Kings of Gold takes a classic theme and adds a thrilling iSoftBet twist with the In-Sync feature during the bonus round. If all five reels sync up, players can win huge sums, while the Hold & Win mechanic is another fan-favourite which has performed exceptionally well for us during 2020. We endeavour to make our offering as diverse as possible and in Kings of Gold we believe we have another title which will appeal perfectly to our ever-growing player base.”

iSoftBet has become one of the top recognized brands in the iGaming industry. It provides services and delivers products with its experienced team composed of great designers and artists. Over the years, the provider has built more than 400 high-quality games, which is impressive. Its portfolio offers downloadable and digital online games, with online slots, blackjack and other table games. All of the developer's products are available for iOS and Android devices. The provider also has bingo games and lotteries, plus it has games on Facebook.

The company offers 24/7 customer support to the players, which makes things safer and more comfortable for users.

As a software design company specializing in regulated markets, it holds licenses in Belgium, the United Kingdom, Italy, Spain and Alderney.