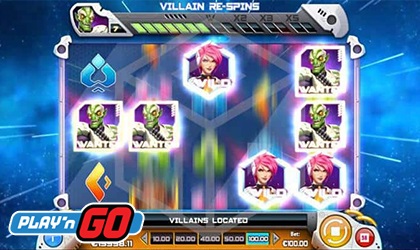 The Female Superhero We’ve All Been Waiting For:

There’s a brand-new slot machine to play and this time, it features a female superhero who is tasked to capture the villains and reward you with big cash! Powered by leading developer, Play’n GO , the Iron Girl video slot features 5 reels and 20 win lines. Playable from 20p to £100 a spin, this mobile compatible slot is designed to excite…

…Join the bad-ass Iron Girl and her Iron Armour as she tracks down the villains in order to collect the bounty on their heads. Features packed into the galactic themed reels are re-spins, wild symbols and multipliers which can be triggered whilst hunting down the Shia, Quake, Thunder and Slith (the criminals). The non-progressive jackpot on offer is 1000x your stake.

Bonus Features to Benefit From:

The Villain Re-spins feature is where the most lucrative villains are held in place, plus any wilds or matching villain symbols, then a re-spin is triggered. This will continue for as long as new matching villains or wilds are found – which could even result in a full reel set of a single symbol; colossal wins!

The Iron Armour feature is randomly triggered during the base game and sees 2 to 5 wilds added to the reels.