In Jazz Launches as New Title from Endorphina 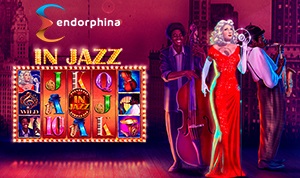 If you’ve been following along with Endorphina’s latest batch of slots, you won’t want to miss out on the most recent video slot from the brand. Just last month, Endorphina set out to release a series of four rich and exciting slot games before the end of April. Throughout the month, players were introduced to titles like 2027 ISS, Cuckoo, and Slotomoji. Most recently, the brand went live with its fourth and final release for the month of April, IN JAZZ.

The game allows for immediate player transport back to the 1930s era in Chicago. Released just in time for National Jazz Day, on April 30th, the title brings to life rhythm and blues, not only in its look and theme, but in its soundtrack. While New Orleans takes the title as the birthplace of jazz music, the city of Chicago had its own jazz scene, as tons of musicians headed to the Midwest to find relief from The Great Depression. At the time, the city was filled with gangsters, and speakeasies, where individuals could gather to smoke cigarettes, drink alcohol, and play music.

The slot embodies the jazz era, presenting a stage, featuring musicians, and a beautiful blonde singer, dressed in a red gown. It sits at the front of a dimly lit, smoke-filled room, where an audience awaits the jazz stylings that are soon to fill the air. Vivid colors make up the screen, and gaming symbols include a saxophone player, piano, logo symbol, trumpet, and the female performer.