Hit the Bullseye in Sheriff of Nottingham from iSoftBet 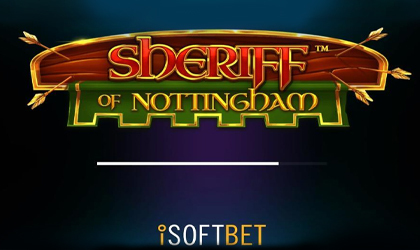 iSoftBet is releasing a new slot game titled Sheriff of Nottingham that is promising to bring potentially lucrative wins to the fans of the legend of Robin Hood.

Granted, the developer has taken a slightly different approach in telling the tale about the famous outlaw, but it still brings the core of what the story is all about.

The new game is all about merging truly immersive graphics with awesome features. The result is an experience that is rewarding in just about every way imaginable.

…will feel right at home with this release. The creative team behind the title has come up with a highly detailed, animated background that depicts the edge of the Nottingham forest on one end of the screen, while the other end shows a castle in the distance.

The grass at the bottom of the reels is slowly moving and so are the treetops all around. Overall, the whole ambient is quite immersive.

Moving on to the symbols, we see highly…

…detailed graphics even in the lower-paying tier. Higher paying symbols come in the form of various coats of arms, while the lower-paying tier features the usual card royals. It’s worth mentioning that many of the symbols are animated, including the bonus, wanted and wild symbols.

The latest release runs on a 5x3 reel grid and 25 paylines. This slot game is packed with all kinds of special features that make it much more attractive overall.

To start things off we have the…

…Robin Riches Bonus Spins mode that offers synced reels. Then there is the Wanted Respins feature triggered when 5 or more merry men symbols fall on the reels. Each of the merry men brings a different prize, allowing players to potentially score massive wins.

There is also a chance of a random pick and choose game being triggered while the logo symbol can also land during the wanted spins, adding more spaces for bonuses.

Mark Claxton, Head of Games at iSoftBet, gave the following statement: “Sheriff of Nottingham hits the bullseye with every magical bonus round we’ve developed. This feature-rich game is another immersive title from our games team, who continue to develop the best content on the market. With four randomly triggered modifiers and two lucrative bonus rounds, Sheriff of Nottingham is another thrilling addition to our ever-growing slot portfolio. In addition to the amazing feature set, this is our first of many ‘Twisted Tales Series’ slots, where the player, for a change, takes charge of the anti-hero in many popular stories and tales to offer a fresh perspective that complements the unique gameplay.”

iSoftBet is a software provider specialized in creating high-end, cinematic slot games for the iGaming industry. Known for highly successful releases, this company has an established presence in some of the most competitive regulated markets around the world. Aside from building games, it also runs the industry’s leading content aggregation platform called GAP.